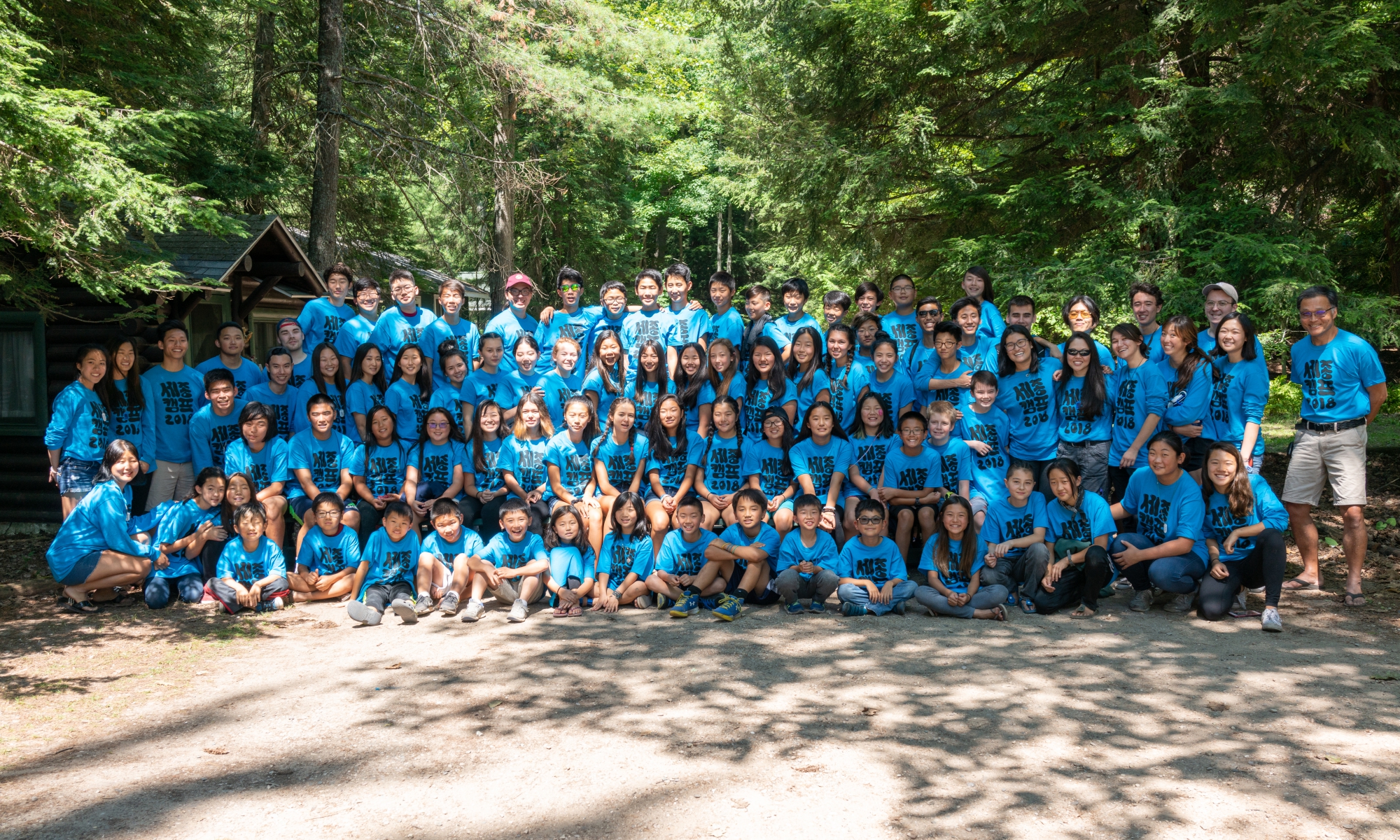 This was the kids’ 3rd year attending SJC and I was relieved it was now part of our routine. Olivia has been really looking forward to it, but about a month before camp, Lucas was starting to share his reservations. He said it was 40% spiders, 35% friends, 10% skit and 15% other.  These were some serious concerns.

Things were getting critical in the days leading up to camp. Grace was making all sorts of side-deals (one shower?!?). I don’t negotiate with terrorists, so I stayed firm and became the “worst person in the world” for making him go, officially earning my tiger dad black belt. He’s still holding a grudge.

There were 64 campers this year, 15 of whom were new. Of those 15, six belonged to David, Grace and Tessie, three of our closest family friends. It was so nice to see them all there finally and each of us had a girl in Olivia’s cabin while Lucas was in a cabin with David’s youngest. Zoë was also finally a first-time camper, too. I’m now used to seeing regular out-of-state friends at drop off and pick up, including my ride-or-die, Joe, who chose to be a good husband instead of a shitty golfer with me all week.

Jeanah pulled a Thelma and Louse with Christine and drove all the way from Philly for our mini reunion later in the week. I had a great time with them and Paula and David at Forest Dunes. It was great to see many old friends at visitor’s day, especially Heather and her dad, who along with her mom, were always thoughtful supporters of mine when I was directing.

I’m pretty sure the kids had a great time at camp, even Lucas, who just won’t admit it yet. Thanks to Jami for directing, the awesome staff for their enthusiasm and empathy, and Doug for continuing to bear the torch of SJC. Our kids are all so lucky and I’m thankful they still have many years of camp ahead. May they appreciate the experience in the moment and years from now, as I do.

Like last year, my only request for the timing of Grace’s family reunion was that it coincided with Sae Jong Camp so that I could take the kids to visit. My main interest is to get the kids comfortable with being there as my hope is to send them there when they are old enough. Olivia will be old enough next summer!

While in Korea, I had suggested to my cousin, Clarence, that he send his kids to camp from New Jersey. A month or two later he emailed saying he wanted to send his oldest son, Andrew, along with a friend from home. I was very excited for them. Last week, my aunt accompanied the two boys on their flight and stayed with us for the week. On Sunday, we dropped them off at the bus.

The other reason why camp is so fun these days is that it’s becoming a reunion for all my old camper friends, who are now all sending their kids to camp (two, three, and even four at a time!). Each year, I’m seeing new old friends and this is a big part of why camp is growing. There were 91 campers this year while there were only about 60 a couple years ago.

Earlier this week, Clarence let us know that he was coming last minute with his middle daughter, Hallie, to visit camp and surprise Andrew. On Friday, we all drove up to camp together. Dr. Rhee drove my parents and aunt and we caravanned together to Camp Westminster on Higgins Lake.

It didn’t take us long to find Andrew, but I think he was so shocked to see his dad and sister that he didn’t have much of a reaction. Unlike last year, the weather on this visiting day was spectacular, so that helped in allowing the kids to enjoy themselves. After almost 40 years, camp remains largely unchanged.

Many of my closest and oldest friends were there this year. Including the parents who helped start the camp, there were three generations of Sae Jong Camp visiting that day. One friend who was sadly missed was Victor, who passed away recently. Mary led a moving Celebration of Life for him at the closing campfire site, where many shared what Victor meant to them and to the camp he loved so much. Hopefully his parents and Renee, who were all present, continue to be comforted by the positive impact Victor had on so many lives during his short time with us.

After the traditional Korean meal for visitors, Karin and Sandra hosted a little party while the kids were off to closing campfire. We were going to go to the house at which they were staying in Roscommon, but Sue Ann, who was serving as the camp’s doctor, needed to stay on site. Thus, the party was held in the Infirmary. Soon, it was quite late and Lucas wanted to go home so we got on our way.

It was amazing visit. The counselors, campers, and Westminster staff were gracious as always. Camp is thriving and I’m so thankful for and proud of everyone who is helping to carry on the tradition. Olivia and Lucas will be campers soon, I hope. Maybe I’ll come out of retirement, too… 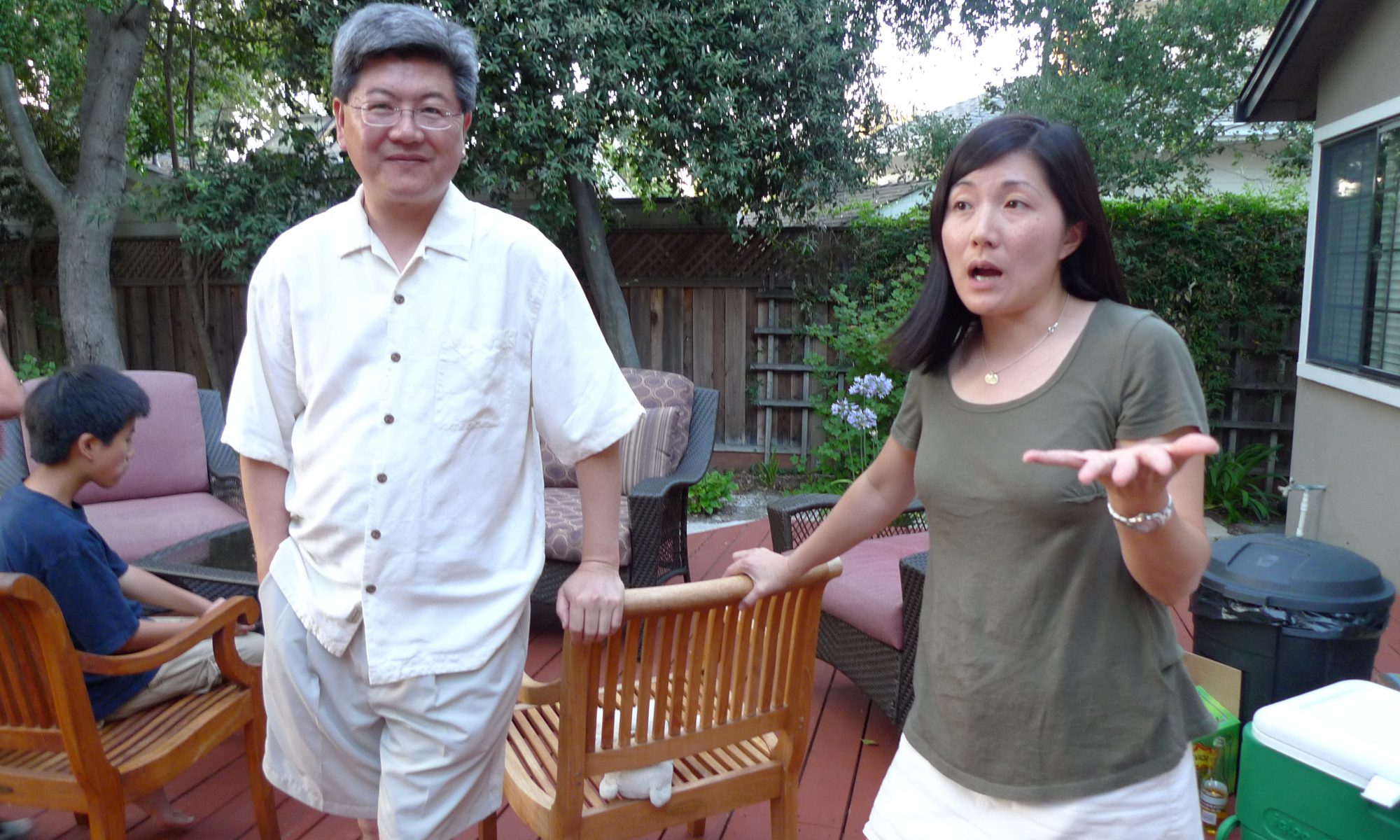 Alice’s family was in town from Portland to visit family and friends in the Bay Area.  She drove down with Owen, Emily and Sparky last week and Bob flew in on Friday.  We haven’t seen them all since the kids were babies and they were living in San Jose.  We went over to Mary and Alan’s house in Los Gatos, which had the most amazing back yard, including a play house that could double for a guest house.  I ran into them at Stanford Mall several months ago and at the time didn’t know they had moved back to the Bay Area from Portland.  John’s family, who live in the East Bay, was also there.  It was great to catch up with Alice and her family, who I’ve known since my earliest years at SJ Camp.