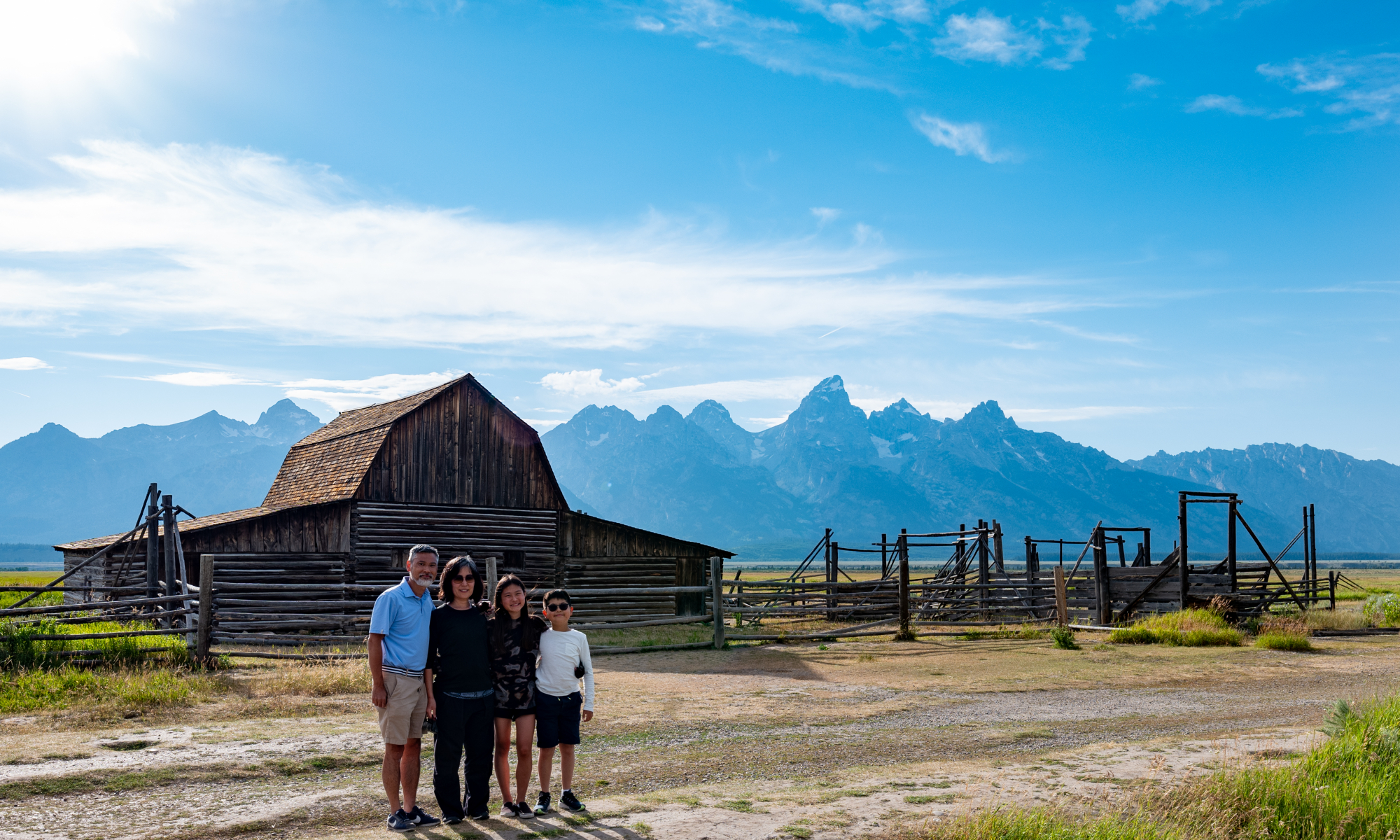 The second stop on our RV trip was Grand Teton. It was originally the first stop, but due to limited availability at RV parks, we went to Yellowstone first, which I think worked out great. I don’t know anything about this area, so even though “Teton Valley Resort” sounds like it’s near the Grand Teton National Park, it’s not. It was about 45 minutes over the hill in Victor, Idaho

We dropped off the Airstream at the park and headed straight out in search for a late lunch. Grace found a great little Thai place in Teton Village at the base of Jackson Hole. I know many people love to ski here, but I just haven’t made the trip (until now). After having our picnic lunch, we went to the top of the mountain on the gondola and took in the sights over a drink.

Afterwards, we went into the park to knock out some must sees. Our first stop was Mormon Row, which is technically just outside the park. After some photos, thankfully we continued down the road beyond the most famous house where several cars were stopped to gawk at … a herd of bison! After the onesies and twosies in Yellowstone, we felt like we hit the bison jackpot. There were baby bison and huge bison. Long before this trip I taught the kids that the scientific name for bison is Bison Bison (thanks, Mr. Engelhard – 9th grade biology).

We had dinner back in Teton Village at Il Villaggio Osteria in Hotel Terra. This was only our second meal indoors during COVID-19. The food was great and the service even better.

For our only full day in Grand Teton, we got an early start. No, we didn’t. We made it to downtown Jackson for brunch at Persephone Bakery. We didn’t get into the park until almost noon.

Skip down to the bears if you don’t care to geek out on cameras.

In anticipation of this trip and possibly these specific photos, I bought a new (used) camera. For the past seven years, almost every photo on this blog has been shot exclusively with the Sony RX1 and then Sony RX1R II. It was the world’s first full frame mirrorless point and shoot. Coupled with its fixed 35mm F2.0 Zeiss lens, the RX1 produces amazing results in a small camera I would take anywhere. I love it. Shortly after getting it, I sold my Canon 5D Mk II rig and never looked back.

During COVID-19, I’ve been selling every unused thing in sight: 5 iPads, 3 iPhones, bike, SUV, golf clubs, memorabilia, etc. A while back, Grace indulged me in an old hobby and I assembled a stereo system that was beautiful to look at, but rarely made any sound. Initially while sheltering in place I was listening to it a lot, much to the dismay of the other inhabitants in our household. I’m not hard of hearing, but I like it loud, like concert level. No one else likes that. So, piece by piece (some 130 lbs), it has been liquidated.

I decided to swap my hobby of not listening to music with a new hobby of not taking pictures. Just kidding, I take a shit ton of pictures. I knew for this trip I would need something wider than 35mm. There aren’t any bad cameras these days, but also no perfect camera has been created. Mostly out of brand affinity, I bought a pre-owned Leica SL. The camera was basically new, but the model is five years old and the SL2 recently came out. Most digital cameras do not hold their value, Leicas included, which I used to my advantage. The body was already 75% depreciated. The glass, on the other hand, is still nuts and the SUV mentioned above barely covered one lens. I know it’s not the best or most capable camera, but it was the one I was most interested in shooting.

Now that I had the body in hand, I still didn’t have a lens to shoot. I knew I wanted to try something different than 35mm, which I already had covered. I started with a 50mm because I haven’t shot with that in forever. Specifically for this trip, I also got a 16-35mm wide zoom, too. This, too, is not the fastest, nor does it have a constant aperture, which Canon, Nikon and Sony all offer. For landscape, I knew I’d be shooting stopped down, so a fast wide-angle lens was not a priority. It turned out to be perfect for Yellowstone, as so many sights are visible only from the boardwalk, where you can’t back up. I ended up shooting it almost exclusively at the beginning of the trip. It’s only F4.5 at 35mm, but even so, I rarely took out the Sony except to do some A/B testing. I also got a tripod, which came in handy for some longer exposures and family shots.

The irony of all of this is that I somehow forgot the Leica in the RV for our one full day in Grand Teton. It was too far to go back and get it. Grace told me it was done and get over it. By the end of the boat ride across Jenny Lake, I was fine. No, I wasn’t. I was crying on the inside all the way up to Inspiration Point.

It turned out that the Sony was more than adequate for Grand Teton. It’s faster than my wide zoom and after developing the Yellowstone photos, I decided wide zooms are terrible for people photos. 35mm isn’t great for portraits, but it’s perfect for family shots, is wide enough for a lot of landscape, and works for friendly chipmunks, too. Each camera can do its own thing, but the Leica cannot really replace the Sony. The SL with a 35mm F2.0 Summicron-SL lens would weigh 3.5 lbs. (more than 3x the Sony) and is twice as large. I could shoot fast M-glass, but it would be manual focus only and that chipmunk would have never cooperated.

Getting back to animals, we saw two bears on the way back to the west boat dock at Jenny Lake (possibly the same bear). The first one was only about 20 feet off the trail and Grace didn’t approve of me chasing it for a photo. We had an afternoon snack on the shore of Jackson Lake. Just as we were leaving the park, we finally spotted our first moose! We checked basically every animal off the list.

We had time to kill before a late dinner back in Jackson. We spent about an hour just hanging out in Jackson Town Square. Grace and the kids got re-obsessed with Word Bubbles, which helped pass the time. We had our best meal of the trip so far at The Kitchen.

It’s possible that I didn’t schedule enough time in Grand Teton. Everyone agreed we should return at least to ski. I might have to come back alone to get some images I know I missed.