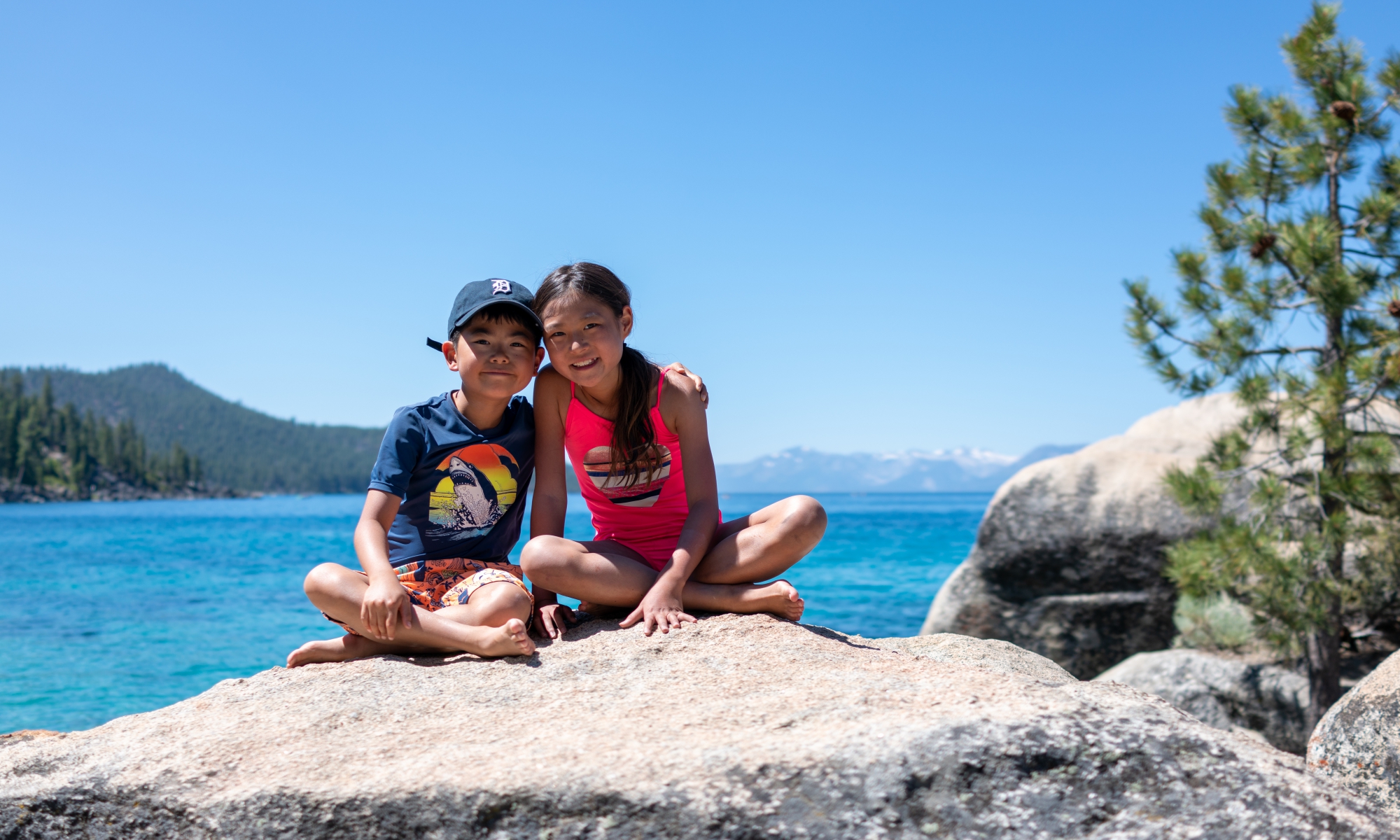 We’ve had many Tahoe adventures with the Moons over the years. Now that their home is finally ready, we were honored to be the first guests to break in the house (figuratively and literally). I guess the real honor goes to Ed’s bachelor party, but there wasn’t a speck of glitter anywhere, so it’s like it never happened.

We arrived on Monday and had lunch at the family barn, which is just a short walk from their home. It wasn’t hard to keep busy for a week with so much to do. The kids got started on a fort, which kept them busy throughout the week. Olivia is really wanting a dog, so spending time with Thando was good practice.

On Tuesday, Elin, Mike and I took the kids to the ropes course, which was challenging and a lot of fun for everyone. It’s a little bit Truman Show to be able to either fish or go bowling only 100 yards apart, but those were our options in the afternoon. Elin took Nico and Lucas bowling while Alex, Olivia and I went fishing. We heard they’re getting smarter and they did prove hard to catch. I got lucky and snagged a 10-12″ trout. Eventually the others found us and both Nico and Olivia hooked a fish but both fell off before landing them.

On July 4th, Mike wanted to go on a hike/adventure he had heard about at Crystal Peak. Apparently, the Crystal Mine trail ends on a mountain of quartz, which is there for the taking (one bucket-full per car per day). We had no real idea where we were going and there was a dispute between Google Maps, Waze and the internet. We also ended up off-roading for miles and had read that the last part of the trail required 4-wheel drive and clearance. I think we looked a bit out of place with all of the 4-wheel dune buggies whizzing by, but we made it all the way up. The kids thought it was fun.

There was no real objective when looking at a huge pile of rocks, so we told them to start digging up a huge crystal embedded in the mountain. That kept them busy for an hour or so (not even close to dislodging it). Eventually they started to search for and collect clear crystals, which were also hard to come by. After a couple hours, we decided to head out and went out a different way, which we were hoping was a little easier on the car. It wasn’t. The rugged terrain lulled everyone to sleep for what turned out to be a 65-mile drive deep into Nevada and back to Tahoe.

Grace brought a lot of food, which included a colorful 4th of July BBQ featuring Fred Steaks. We finished early enough to head down to Tahoe City to catch the fireworks. Things didn’t get underway until well past 9:30pm when it got truly dark out. Of the 600+ photos I took on the trip, it’s possible that 300+ were of fireworks. I posted one, which still looks terrible. I think the iPhone has those nailed.

Thursday, we wanted to go to the beach on Lake Tahoe. Thando was joining us, so it had to be dog-friendly, which ruled out our usual Sand Harbor. Mike determined that Chimney Beach was the place to go, but it has limited parking so we got a very early start and were one of the first people there. Elin and I were trying to guess the water temperature in both Celsius and Fahrenheit. Either way, it was super cold, but the kids and Elin braved it (well, Lucas was less brave). We stopped at the Lone Eagle restaurant in Incline Village for lunch, which was well deserved after the big hike back to the cars. Clara, Mike, Grace and I had one adults-only dinner out at Plumpjack Cafe at Squaw Valley.

Friday, we played putt-putt, which wasn’t the hit it through the windmill type, but rather real greens meandering through the neighborhood. There was a lot of slope to the greens, which resulted in some big scores. Some of the group stopped after 9 holes, but Elin, Nico, Lucas and I pressed on to finish 18. There was a great family festival going on, which kept the kids busy for a while. Mike, Grace and I left early to play real golf. The Martis Camp course is so beautiful and is in amazing condition (until we came along). Mike got some advice to stay out of the bunkers, which was sage. It didn’t help.

On Saturday, we had one last meal together and prepared to head home to the real world. The kids were excited to show us their fort, which was a legit lean-to. We were sad to leave after such a fun-filled week with our gracious hosts. Thank you, Moons, for another amazing vacation together.