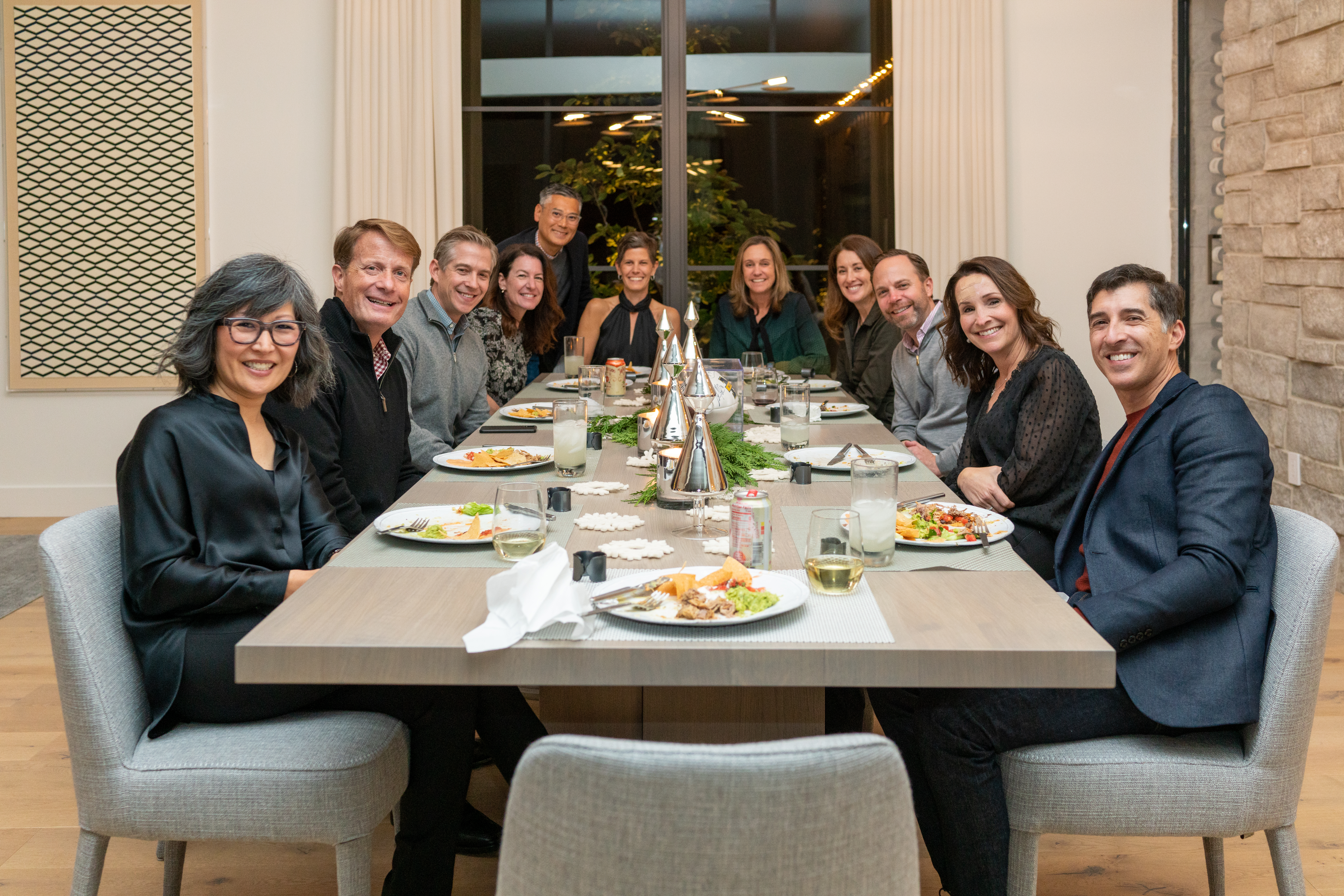 It’s hard enough to schedule a holiday party and much more so during a pandemic. We skipped it last year, but were determined to get back on track this year. Some regulars decided to leave the country (temporarily) and others had conflicts. Amy and Grady were kind enough to host at their new home.

In the time of COVID-19, it’s perfectly normal for one of the hosts to participate virtually. Grady had a solid reason to be away and Amy handled this rowdy group effortlessly. As we age, the gift exchange becomes tamer and tamer (and more full of CBD-related products).

Glad we didn’t pass up the opportunity to celebrate the holidays with dear friends, despite a lot of other things going on. Happy Holidays and GO BLUE! 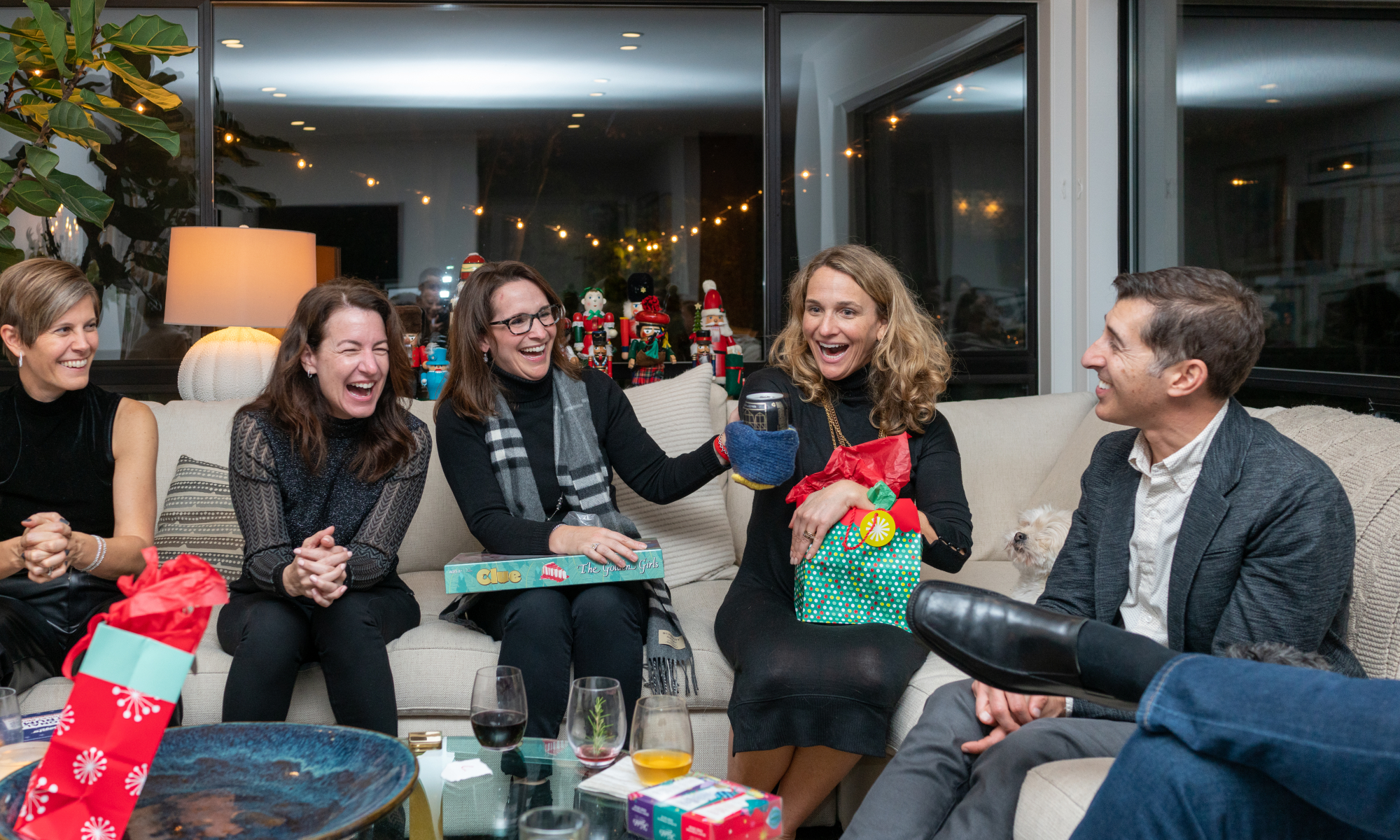 Up until a few weeks ago, there was radio silence on our annual U of M holiday dinner. Thankfully, we were able to lock in a date and the Hoffmans graciously offered to host at their beautiful house. One thing that makes it hard to find a time are those pesky kids and their schedules. We lost the Thornes at the last minute due to an out-of-town soccer tournament. We also lost our lone Aussie, Michael, due to work.

The rest of us had to press on with delightful food and company. Look at all of these beautiful smiles and festive people! Jenn preparing her salad in the laundry room / sous-chef area is something out of an InStyle spread. The white elephant gift exchange was rather tame, with only a few real stinkers, which Jenn had a knack for selecting. The squatty potty was a nice touch and thanks to Matt for demonstrating. Cutest couple goes to Jason and Ben.

The older we get, the earlier this party breaks up. That said, I’ll never tire of this group of amazing friends. Happy Holidays and GO BLUE!

Capping off an amazing homecoming weekend with Grub, Chip and their sons. #goblue 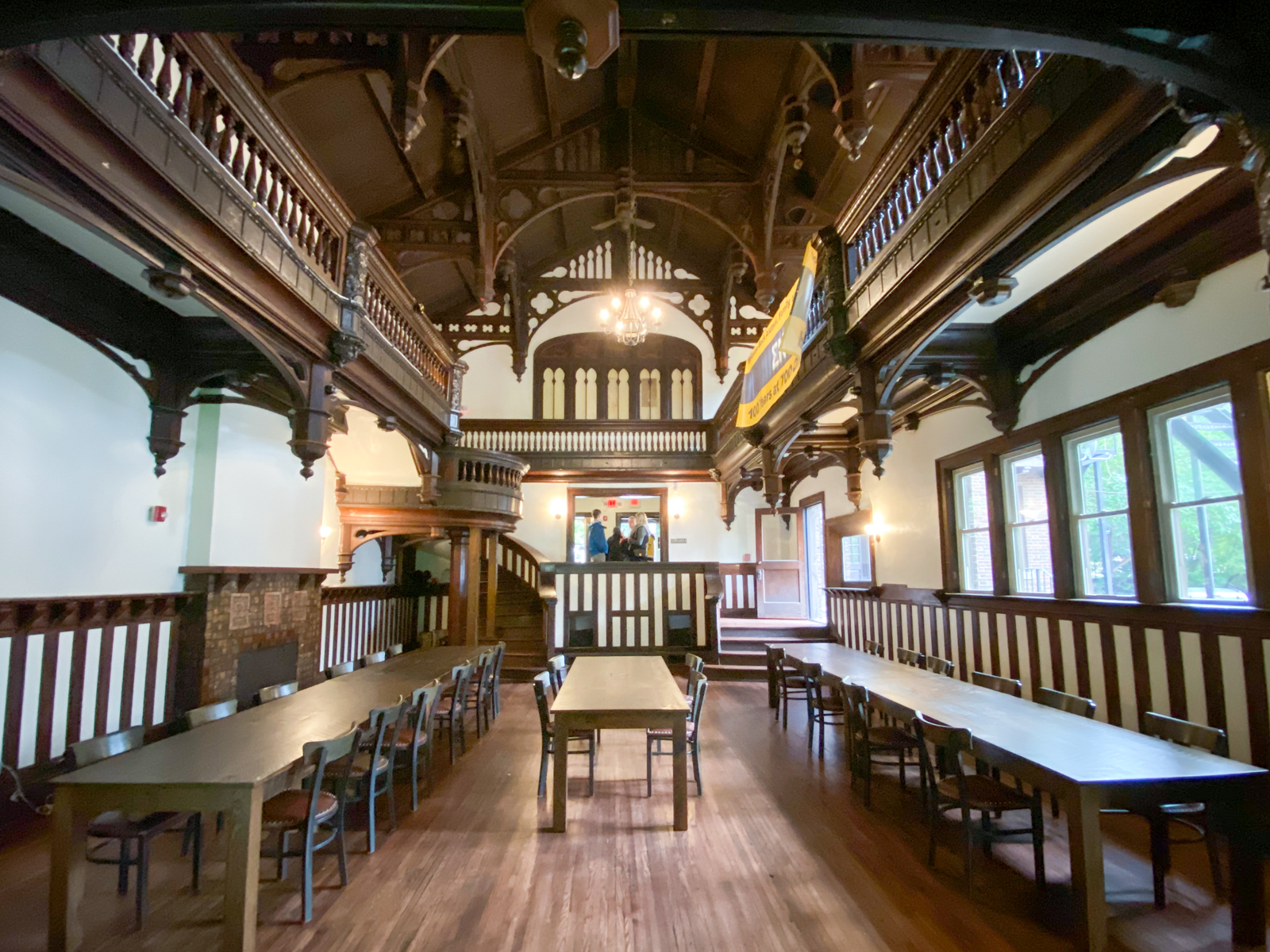 Anyone who knew me for my first 19 years, or even first 49 years, might be surprised that I would join a fraternity. But, for a number of reasons, I returned to U of M for my sophomore year determined to try something different. Unfortunately, that didn’t include becoming a better student. I went through the Fall Rush process and found a house where I knew a couple of people and seemed like a good fit for me.

One main consideration was that up to that age I didn’t drink at all, which made the prospect of being a pledge all the more improbable. However, Sigma Nu was founded as a non-hazing fraternity, so if I believed it possible to remain myself, while at the same time expanding my horizons, it seemed the right place for me. Thankfully, the existing members somehow felt the same way about me.

I often reflect on how I could be standing by the keg at a party and someone out of courtesy would offer me a beer before they realized to whom they were speaking. It wasn’t uncommon for that person to apologize. Listen, we were young, and did truly idiotic things all the time, but even at that age, there was also respect, maturity and inclusiveness that I appreciate to this day. Reflecting further, I know we could have done even better, but I do believe there was a sense of honor and collective consciousness that made this group different from most others (I’m biased, of course).

This past weekend, dozens of brothers from all eras returned to Ann Arbor to celebrate a number of things at Sigma Nu. A little over 10 years ago, the house had lost its way. Despite efforts by alumni to help them get back on track, they were ultimately kicked off campus. It was sad to have another fraternity living in our house, and trashing what was one of the most beautiful, grand homes on campus (again, biased).

Thanks to some students who didn’t see the house they were looking for on campus, and with the help of alumni, the house corporation, and the national organization, Sigma Nu was recolonized over the last couple years and this Fall a great group of young men moved back into a partially renovated (i.e., inhabitable) house at 700 Oxford Rd. Super big shout out to Brownie, who has invested so much time and energy to making this happen.

It was also a celebration of 100 years of Sigma Nu at U of M, so there were festivities both before and after the Iowa game.

Best weekend with the best guys ever. GO BLUE! 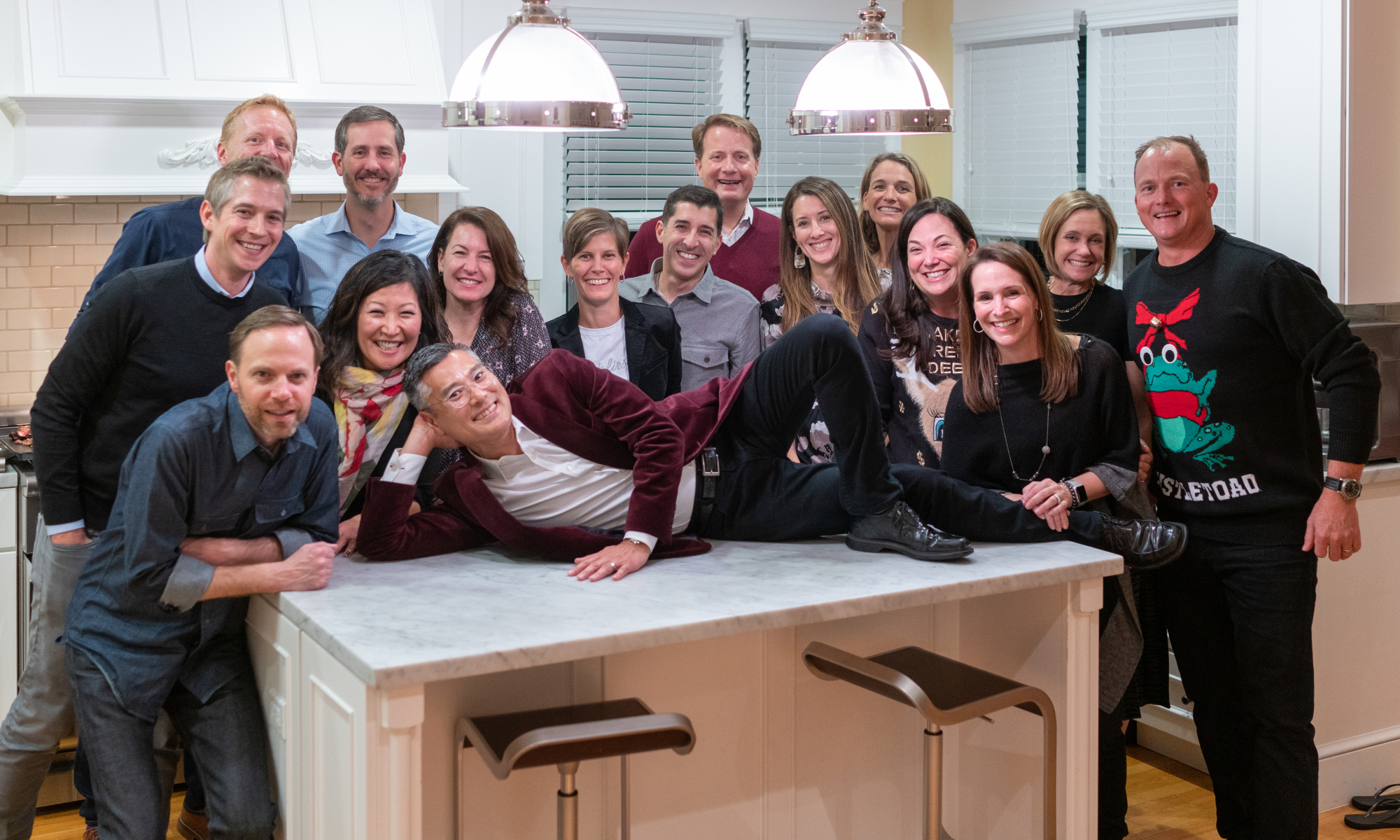 One of our favorite traditions with our U of M friends continues. Grace and I hosted our annual holiday dinner and gift exchange. Even though I volunteered to cook the main dish, Grace had to hedge with her own. We ended up preparing dueling beef: prime rib vs. beef tenderloin. There were some issues with the timing and a large flare-up made things exciting. Eyebrows are intact and dinner was served.

Everyone came through on the potluck and delicious appetizers and desserts were enjoyed by all. Despite Krista’s strong objection (two years in a row), the women and men dined separately. It’s unclear what was going on with the ladies, but they were much more boisterous than the civilized conversation we were having about everything that never happened in Las Vegas or New Orleans over the years.

Somehow I got talked into Burt Reynoldsesque pose on the island. I was not the creative director of that shot. No one is going to see it anyway.

Our gift exchange is becoming less savage over the years. Ever since we mixed the nice ladies gifts with the more festive mens gifts, there’s less stealing because everything is either really good or really bad (in an awesome, Nicholas Cage kind of way). 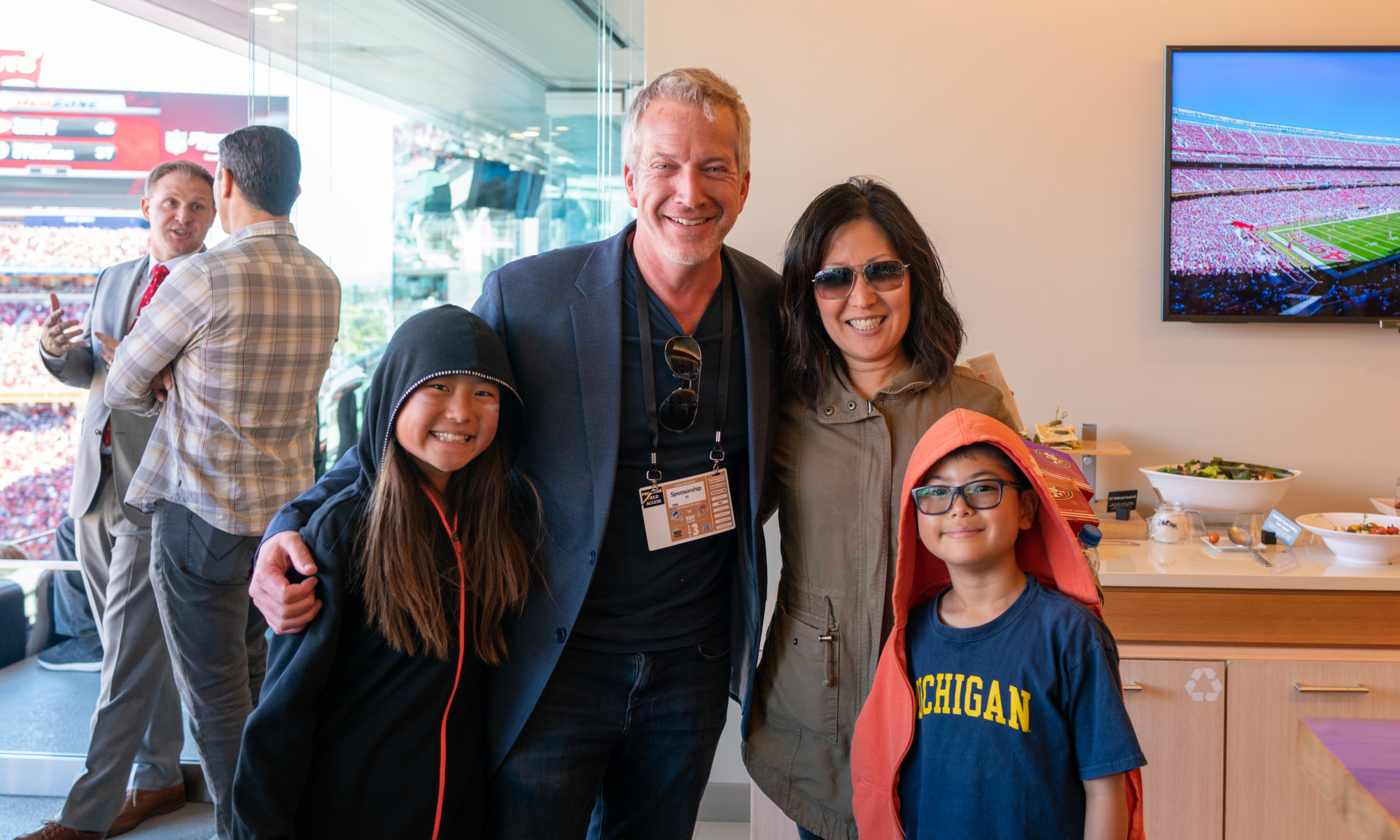 On September 16th, Hans invited our family to the 49ers game. Coincidentally, it was against my hometown team, the Detroit Lions. After 18 years of living here, this was my first 49ers game (I’m admittedly not a big pro sports fan).

I had a sense we weren’t sitting in the cheap seats, so I informed the kids not to get too used to the accommodations, which turned out to be stunning. Lucas said if there was a bathroom and shower, he could live there. It was a huge treat.

In the end, the Lions didn’t pull it off, but at least made it close. I’m sure my Bay Area friends were happy with the outcome. For me, it was nice to catch up with an old friend and see him doing well in his new venture.

Thanks, Hans, for the amazing hospitality. 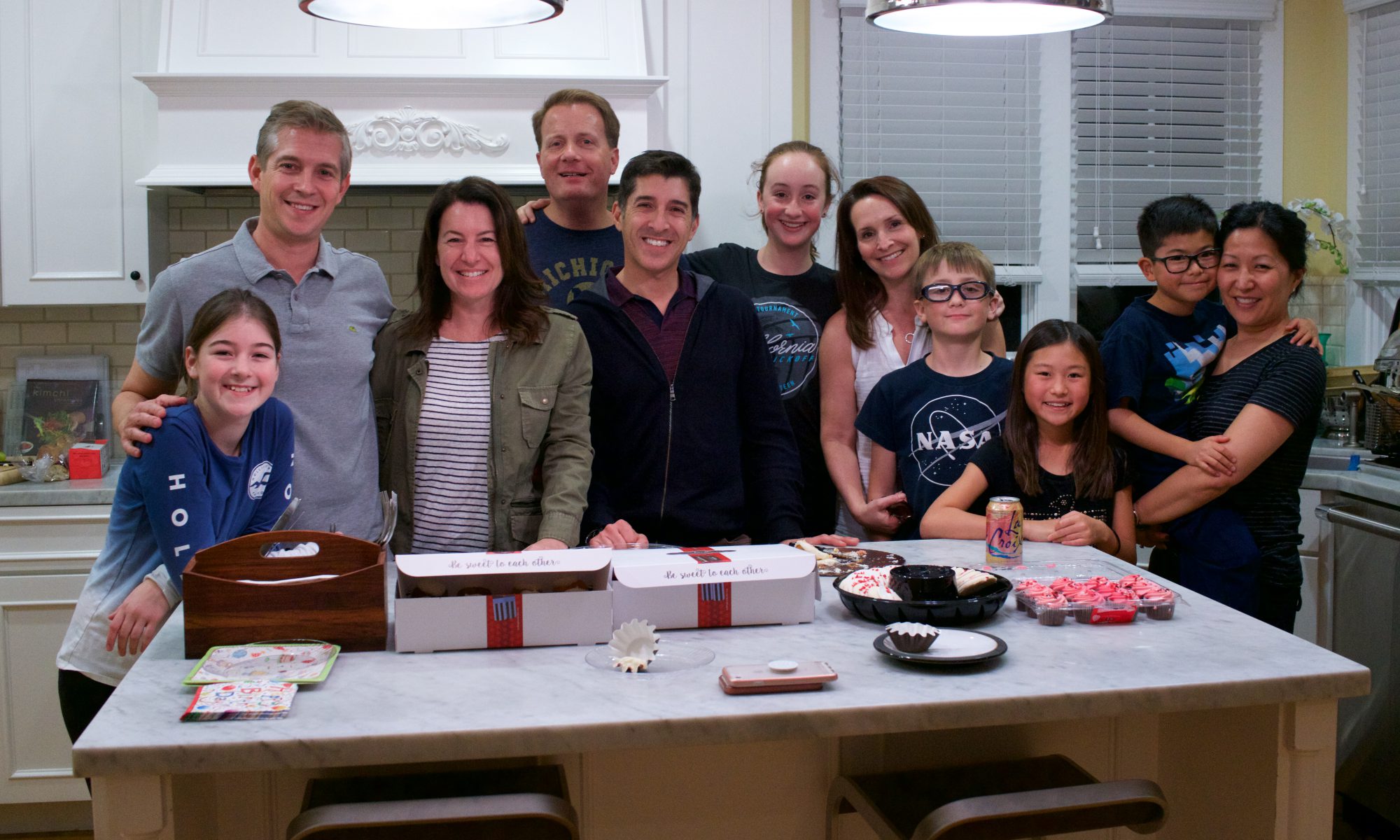 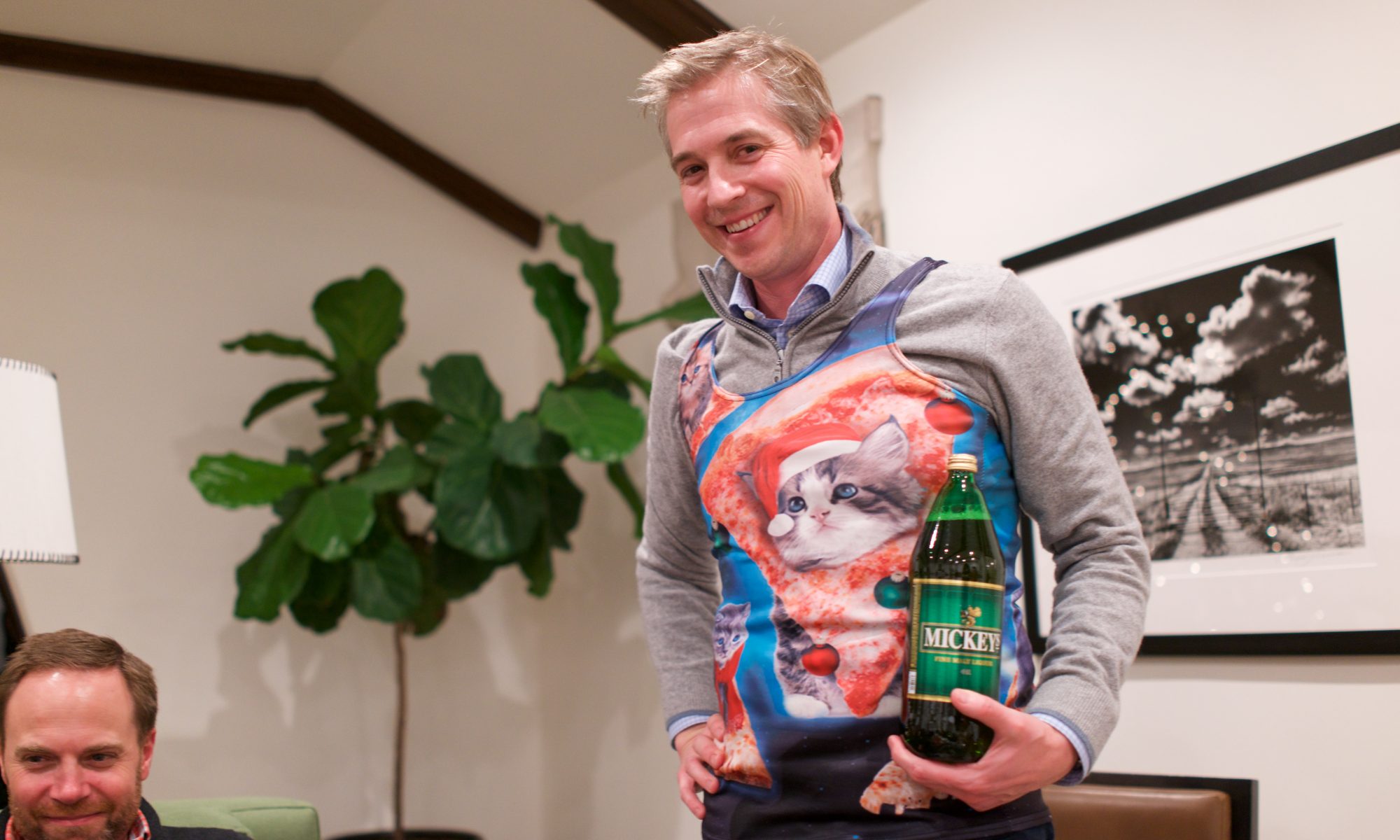 Although we’ve been gathering for years (odd, no football this year), by my count, we’ve been celebrating the holidays together for 7 straight years. This year, the Idemas graciously hosted at their beautiful home. I caught a glimpse of the shimmering new pool, but we won’t be wreaking havoc out there until next year.

Although Krista might be writing a letter to management about the seating arrangement, we ended up in two distinct dining areas. Dinner and desert were amazing, but the true main course is our gift exchange. You would think that with wisdom and experience, our gifts would become more age-appropriate. However, they’re only becoming more outlandish and yet strangely useful (my “Pocket Kim Wisdom” book excepted).

The photos are otherwise presented without commentary as they speak for themselves. A warning to all, if you pose for the photo, it’s definitely going to end up on the internet. I think you all look amazing.

Thank you, Idemas, for hosting another memorable event! Happy Holidays and GO BLUE!

Posse got the ball rolling on our annual holiday party with the Michigan crew. Morgan and Greg graciously invited everyone over to their house in the city. Posse, being the planner, arranged high-class transportation for all the Peninsula couples.

We met at Tam and Ben’s for a little pre-party while the Menlo Park crew we’re on their way north. Our little party bus was beyond expectations, replete with diamond-quilted seating, which is a far-off dream of mine. Now I want one.

We arrived at Morgan and Greg gorgeous home in San Francisco and rolled right into cocktail hour(s). Our holiday parties have alternated between homes and restaurants over the years. One really nice thing about this year was the chance to meaningfully connect with old friends. All of dinner was delicious, but the standout effort was Morgan having the caterer recreate their take on the Pizza House Chipati. It was a stroke of genius.

The highlight of every party is our gift exchange. This year was a little less contentious only because the early pickers had some unfortunate choices that did not warrant a steal. As always, hilarity ensued. Unexpectedly, the gift exchange paused when Guns ‘n Roses came on. Grace and I always get shit for going home with our own presents, but when you buy awesome presents, that’s what happens. Our hostess was only getting started just as the Ubers were summoned to take us back to the suburbs.

Thanks, Posse, for making all the arrangements. Thanks, Thornes, for hosting us all. Thanks, crew, for decades of friendships and laughter. Happy Holidays to all! 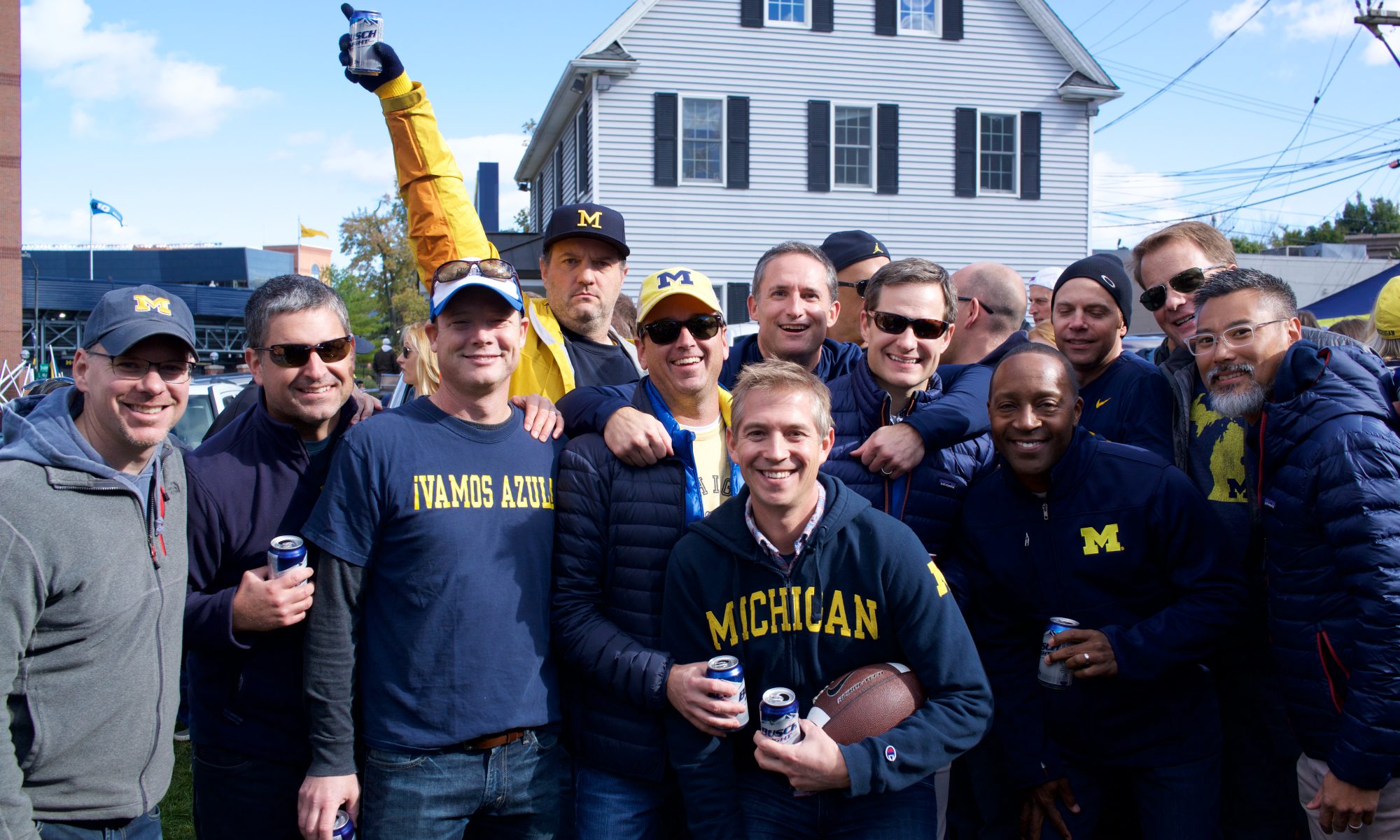 Jon and Greg have been trying to rally everyone to Homecoming for a few years. This year turned out to be the year (it doesn’t hurt that we finally had a good chance of winning too). Jon may have oversold it a bit with talk of a barn dance, carnival rides, petting zoo, etc. His excuse was that he wasn’t able to build the barn, which I guess is a good one.

On Friday, Fran and Jon hosted everyone at their home. It was awesome to see all of the kids (and adults) together. Pretty much the entire Bay Area crew (Grace and the kids excepted – sad face) made a strong showing.

On Saturday, Jon and Greg hosted everyone at their tailgate. Many more friends rolled in from all over on what turned out to be a glorious Fall football Saturday. Worlds collided as Jen, friends from b-school and even POPSUGAR were there.

Greg graciously hosted me, Buecker and Allard in his seats in the new club level. This was my first football game in the new Big House (I had been inside for the Man U vs. Real Madrid game a couple years ago), and experience was amazing.

Afterwards, we went back to the tailgate and then someone invited everyone over to Greg’s house (but I’m not sure it was Greg). I had a quick dinner with Jen and Kim on Main Street. I walked out of the restaurant and ran into two high school friends, one of whom I coincidentally ran into at the Utah game last year. Shenanigans at Greg’s lasted well into the evening and thankfully nothing was broken despite many high-risk activities.

Sunday turned out to be beautiful and warm, which was perfect for coffee outdoors at Zingermans (where I ran into more friends randomly). I drove around to all my old stomping grounds: where I used to live, work, miss class, get parking tickets, get towed, do the crossword in the Michigan Daily, etc. I made one last stop and had a quick visit with Maggie (a POPSUGAR buddy and her Carhartt-wearing dog, Rupert).

What an amazing weekend with lifelong friends. Thanks again to Fran, Jon and Greg for hosting all of us for a memorable weekend. Next time, Grace, Olivia and Lucas are coming, too!