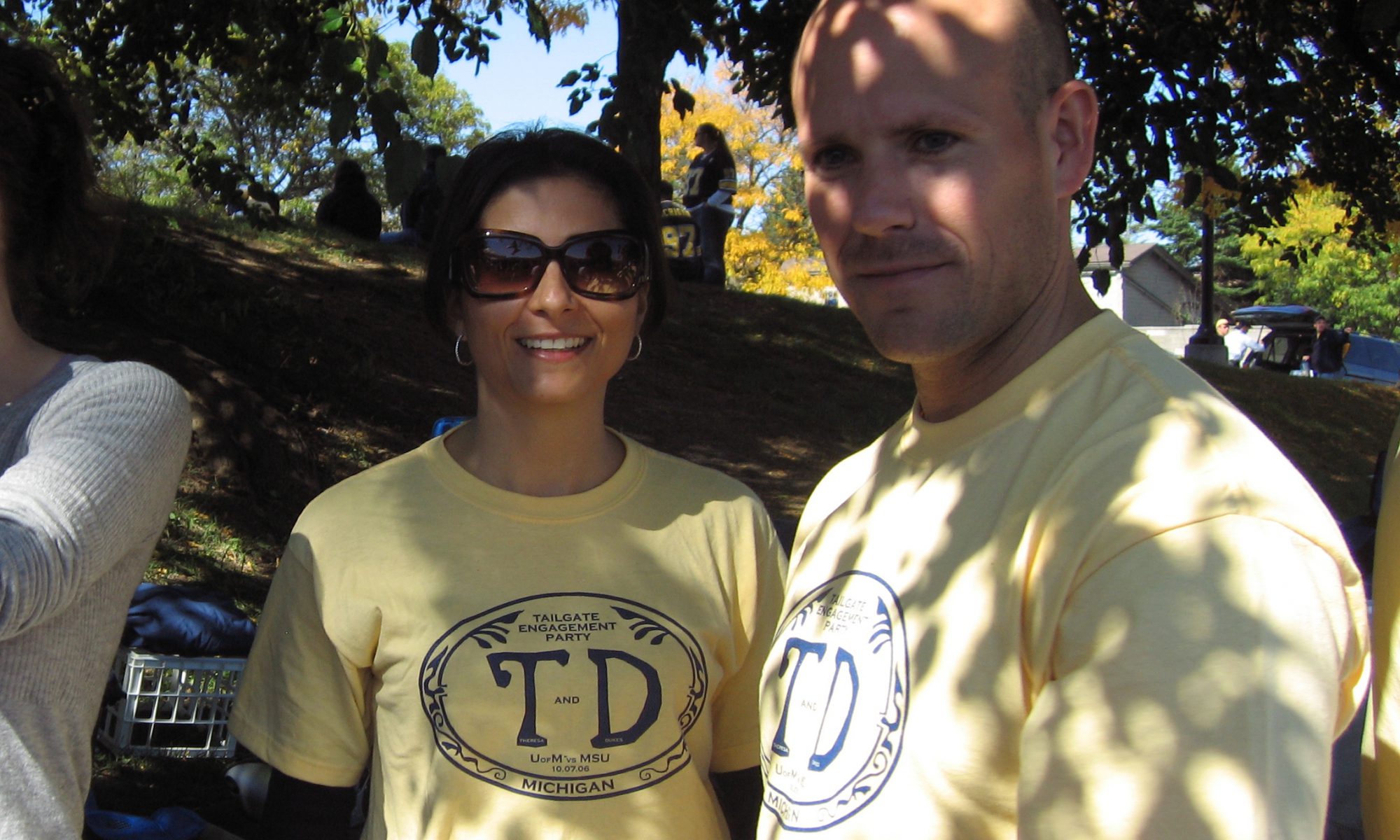 On October 7th, Andi and Greg hosted a Michigan tailgate to celebrate Theresa and Matt’s engagement. It was an absolutely stunning football Saturday in Ann Arbor. The crew on hand for the big Michigan State game was large indeed. This was our first time meeting the beautiful Jolie Tru Lobdell. Also, Maeve TenBroeck Taras made her first Michigan appearance. We were lucky enough to meet her on Friday over at Jeffrey’s parents house, where we also had the pleasure of catching up with the Drs. Taras as well as the dogs, Max and Colin (who has warmed up to me after 10 years).

The Carlsons, Burnetts, Allards, Carnes, as well as Rana and Nomaan, Rowan, CB, Durbin, Cohen, Fritz, Regan, Lamarchial, Marty, Simone, Brownie, Dr. Jin Hong Park and Christine Chung (the lone MSU fan), were all on hand to toast the happy couple. Of course, Fall 89 was in full-force to honor our pledge brother, Matt. It was great seeing everyone, though briefly. Thankfully, the good guys won the game. Go Teresa and Matt and Go Blue! 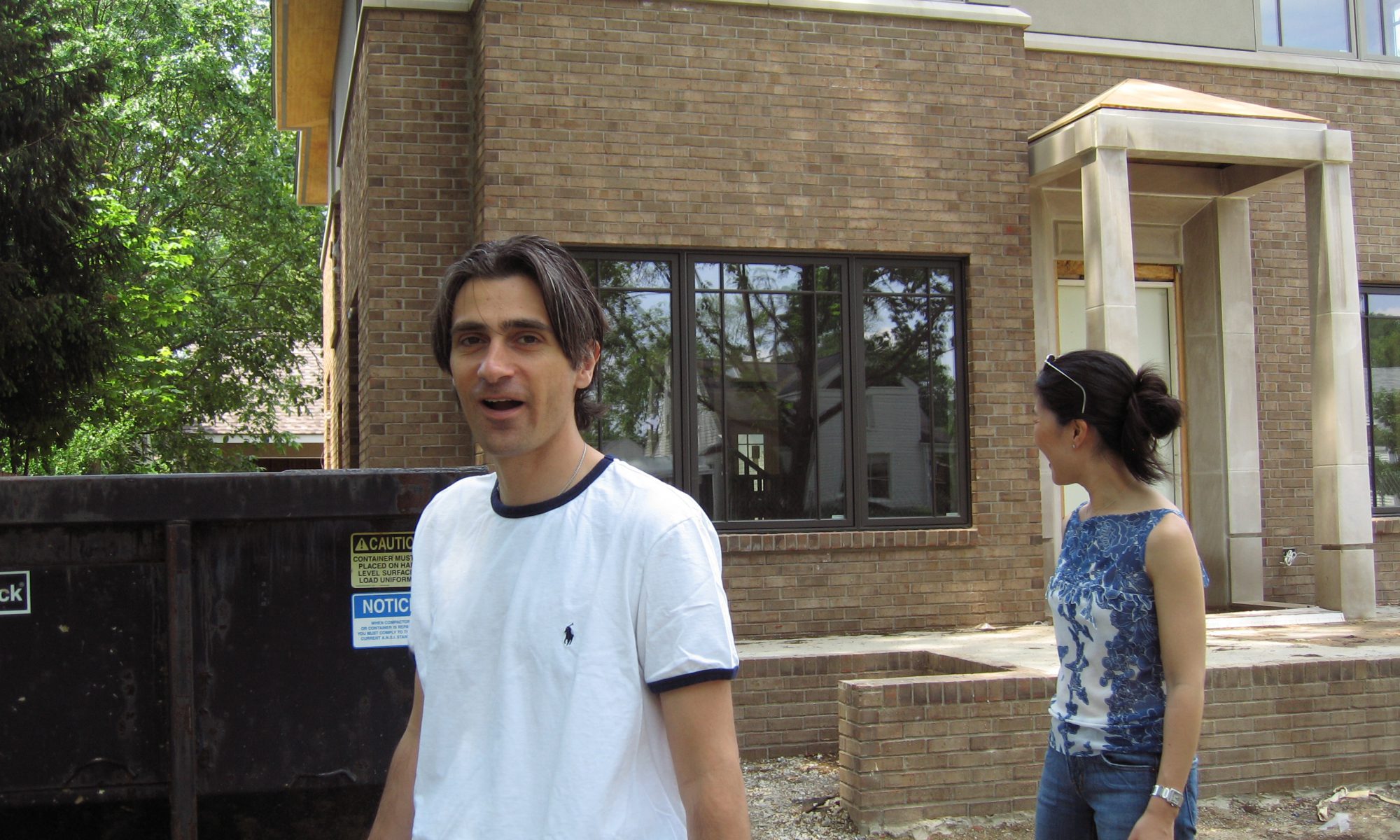 Grace and I met up with Melanie and Nick at their beautiful new Birmingham house, which is still a work in progress. Grace was concerned about a chipmunk who found itself stuck at the bottom of one of their basement windows, so we attempted a rescue. Mel and Nick treated us to lunch at the Townsend hotel. Afterwards, we made a lap of Birmingham, which was very quiet due to the holiday. Nick reported that the chipmunk apparently escaped, so Grace was relieved. 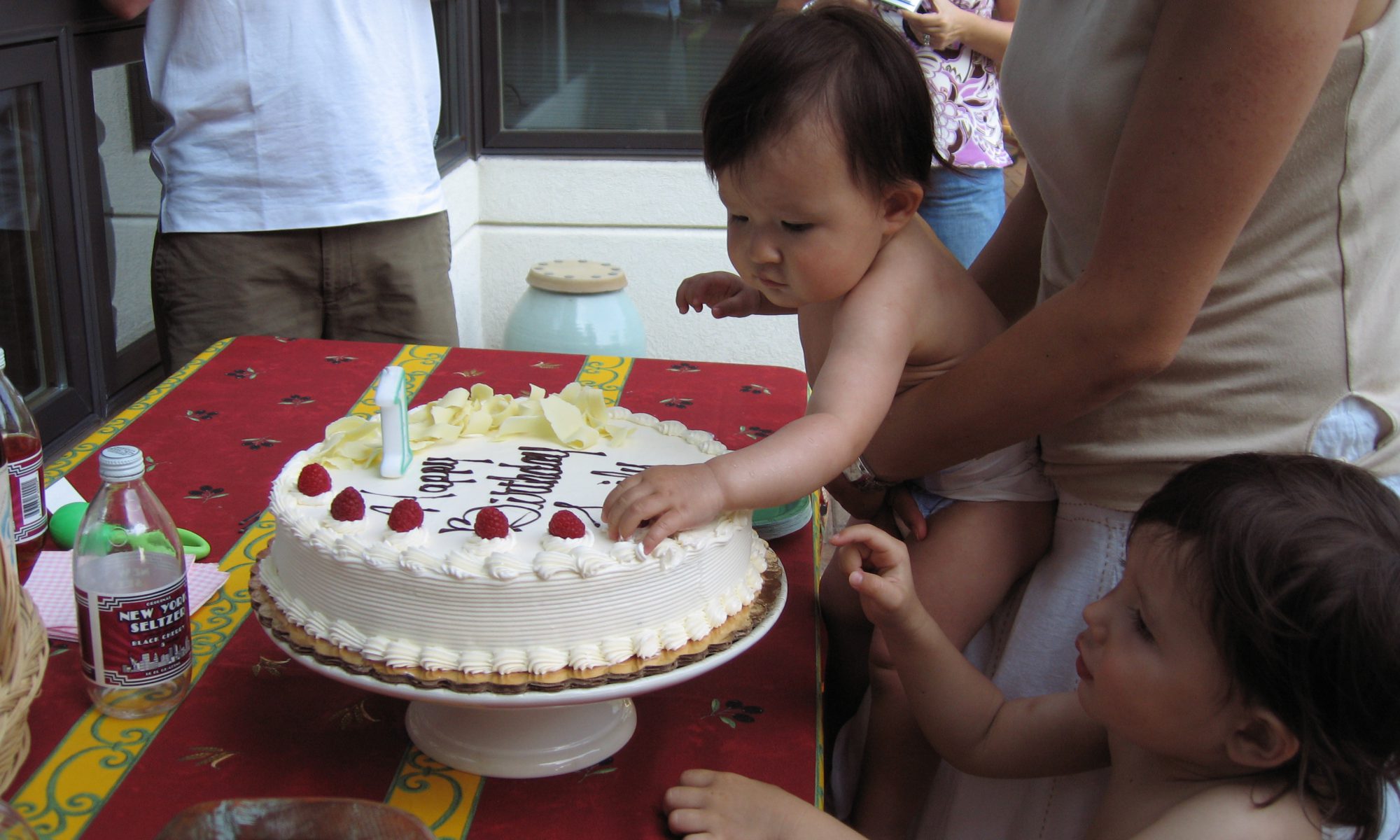 Frances and Jon invited us to Lily’s first birthday, which was held at Frances’ parents’ beautiful house on Upper Straits Lake. Frances’ mom also kindly invited my dad, who’s home alone while mom is in Korea. In addition to Jon’s parents, the Lobdells, Thornes, Sanchezes, and their friends Sue and David were also there. Kendall and I continued to enjoy eachother’s company. Everyone, especially big brother, Jacob, had a great time.

This Memorial Day weekend, Grace and I traveled home to Michigan for the wedding of Charlotte Garry and Ryan Carne. After picking up Grace, who was flying in from business in Atlanta, we headed straight to Ann Arbor. Grace was craving a Chipati, so we went to Pizza House. Like nerds, we spent most of the time calculating the number of Chipati’s sold during their 19 year history. Grace’s initial market sizing proved to be low, though the over-under on 1 million is still up in the air.

We visited a number of places on our tour that afternoon. Notably, No Thai, which was recently opened by several friends from camp. Big Brian was manning the wok when we stopped by. The place looked great – good luck! We also stopped by “the house” at Hill and Oxford. I haven’t been inside in years and on this trip, it looked neither inviting nor safe. Hopefully, we can do something to turn things around.

Many may not know that Grace coincidentally lived in “the house” next door (former A-O-Pi house) from about age 3 to 5, when both the Park and Hur clans bought up houses from the failing Greek system in the 1970’s and lived in them while renting them out to students. Grandparents, aunts, uncles and cousins called the Triangle, DKE, A-Chi-O, and “the Taco Bell” houses home during those years. Later, when the Greek System was revived, they sold them back and moved on.

We also drove past several other landmarks, like my beloved Mosher-Jordan Hall, where I lived for three of my five years during college. I read that major renovations are planned. Hopefully they preserve the quintessential charm of living on “the Hill,” though the room in which I lived as an RA during my 5th year is unlikely to be saved. We drove past the ever-expanding hospital where I worked, past Grace’s parents’ first rental property on Fuller, and made a stop at Eureka Cleaners to visit her aunt and uncle.

On Friday night, we met up with Greg, Andi, Morgan and Fritz at Vinology, which opened just several weeks ago and is just one of many projects Jon and Greg have in the works. I’m no connoisseur of wine, but the food, design, and ambiance were fantastic and we’re sure it will quickly become an Ann Arbor institution. Afterwards, we met up with the rest of the wedding crew at Eve, where Charlotte and Ryan held their rehearsal dinner. Char had already turned into a pumpkin, but many of the usual suspects remained. It was great to catch up with friends who had come in from all over.

Saturday, Grace and I met her cousin Jea and his wife, Min Hwa, for lunch at Zola’s. Afterwards, we stopped by Greg and Andi’s beautiful new home in the Burns Park neighborhood of Ann Arbor. It is a wonderful home with lots of space, especially for their baby girl due next month. This was also the first time we got to meet Morgan and Greg’s baby, Kendall Reese. I admit that I’m usually not a hit with the babies, but Kendall and I made fast friends.

The wedding was held at Barton Hills Country Club, across the Huron River from Ann Arbor. Though the weather, setting, and even the groom were lovely, all paled in comparison to Charlotte. Classically beautiful and elegant on any day, she was a stunning bride.

The wedding brought together many old friends, some of whom I have not seen in years. We were excited to see Kreston Canada, with whom I lived in “Penthouse” with Jeffrey, Matthew S-H, and Fritz our first year in the house. Rheuben, Greg, Jon, Fritz and I rounded out the rest of the Fall ’89 team.

I met Ryan over 15 years ago and we connected immediately. He ended up as my little brother in the house and I’ve thought of him as such ever since. We were very happy that Ryan and Char came all the way to California for our wedding last year and we were very honored to celebrate with them on their big day. They are a couple who all know were meant to be and we wish them the best in their new life together. Great wedding!

I spent the weekend in Michigan with the boys for Mark Brown’s bachelor party. Jon was gracious enough to have us over to “Carlson’s Cabana” on beautiful Grand Traverse Bay. I met up with Matt S-H shortly after 5am at O’Hare on Friday morning. We were greeted with Northern Michigan hospitality when our cab driver offered us pot after 3 minutes in cab. A lot of the gang had been in town since Wednesday, so some damage was already done by the time we arrived. The good news was that Mark (aka Brownie and Mud) turned $20 into $1200 at the local casino. Friday was spent relaxing on the water and at the Cabana and engaging in sporting activities like whiffle-ball and the bag toss game Regan and Cohen brought from Chicago. All of this was preparation for the official Olympic games held in the evening, where four teams battled each other in indoor bags, pig hunt, bat-spin relay, and outdoor bags. I didn’t get the final standings from commissioner Lobdell, but I think my team won.

The evening ended very late and some of us had a 7:40am tee time. I wasn’t sure if people could rally, but I got up around 6:30am and everyone who was planning to play rose to the occasion. After scouring the house looking for the players, I found Whitey. He was the second person to leave “the games” after tripping over the garbage his dog, Buddy, got into on the porch. Someone found him passed out between the cars on the driveway. I found him a bloody mess in the morning, but he sprung up immediately. I called T’kindt when I didn’t find him. He was sleeping in his car. Ryan Arnold was down the road at his sister’s condo. Lamar and Charles were also ready and we made it to the course with time to spare. We played the new course at A-ga-ming, which was very nice. By the time we got back, the rest of the fellas were up and already at it. Some of the others were well into their own round of golf on the Playstation. I had a nice siesta on the hammock, which was much-needed.

It was more bags and whiffle balls until the early evening, when the party bus pulled in to take us into town. We made a stop at the Bay View Lounge to say hello to Whitey’s sister and have some drinks and pizza. Then it was off to the Holiday Inn, to party at the world famous Shimmer’s nightclub. Good times. From there, things got a bit disorganized as the group splintered. Half of us headed back to the cabana on the bus. The other half were banned from Shimmer’s shortly after and had a tougher time getting back. I think Carne and Cohen finally got back around 4am. The rest of the evening was a little painful for me. I fell asleep during the third viewing of Kill Bill Vol 2. and woke up around 3:30am, fetal on the couch, with no protection from the adult entertainment blaring in my ear, the fan creating a wind chill, and the mosquitoes attacking me. My sleeping bag was MIA. I had the fleeting thought that I may be getting a little old for this. However, there was talk of making this an annual event. If so, I’m in.

The trip home was not as easy as the trip there. Our flight out of TC was delayed. My theory was that the crew had a late night at Shimmer’s. In any case, we missed our connection in Chicago and spent 11 hours at O’Hare trying to get a flight back to SFO. S-H and I upgraded on the 6pm and convinced Posse to miss his confirmed 5:10pm flight to ride the back of our bus (a 747 no less). We weren’t wheels-up until 9:30pm because United couldn’t find their 747. Disaster. 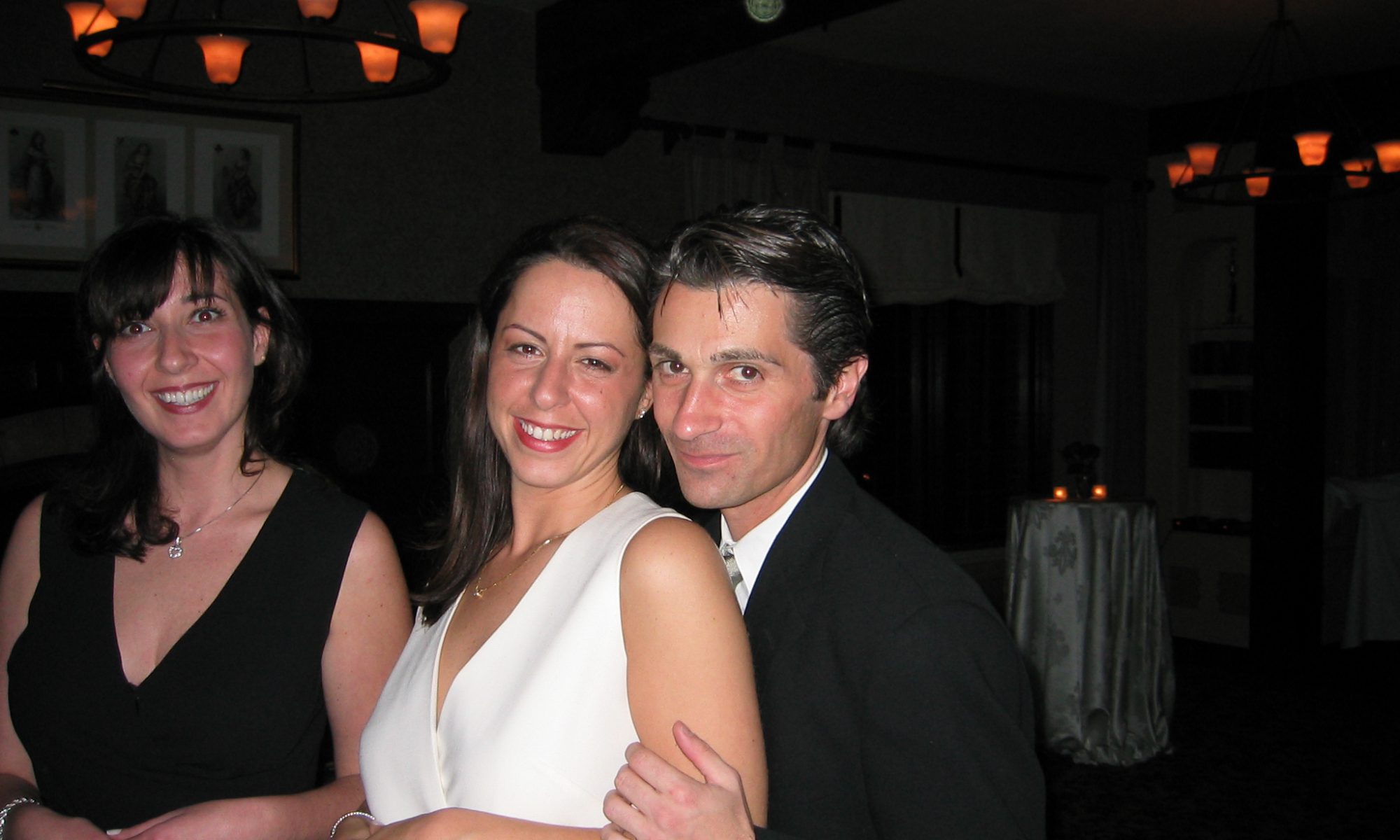 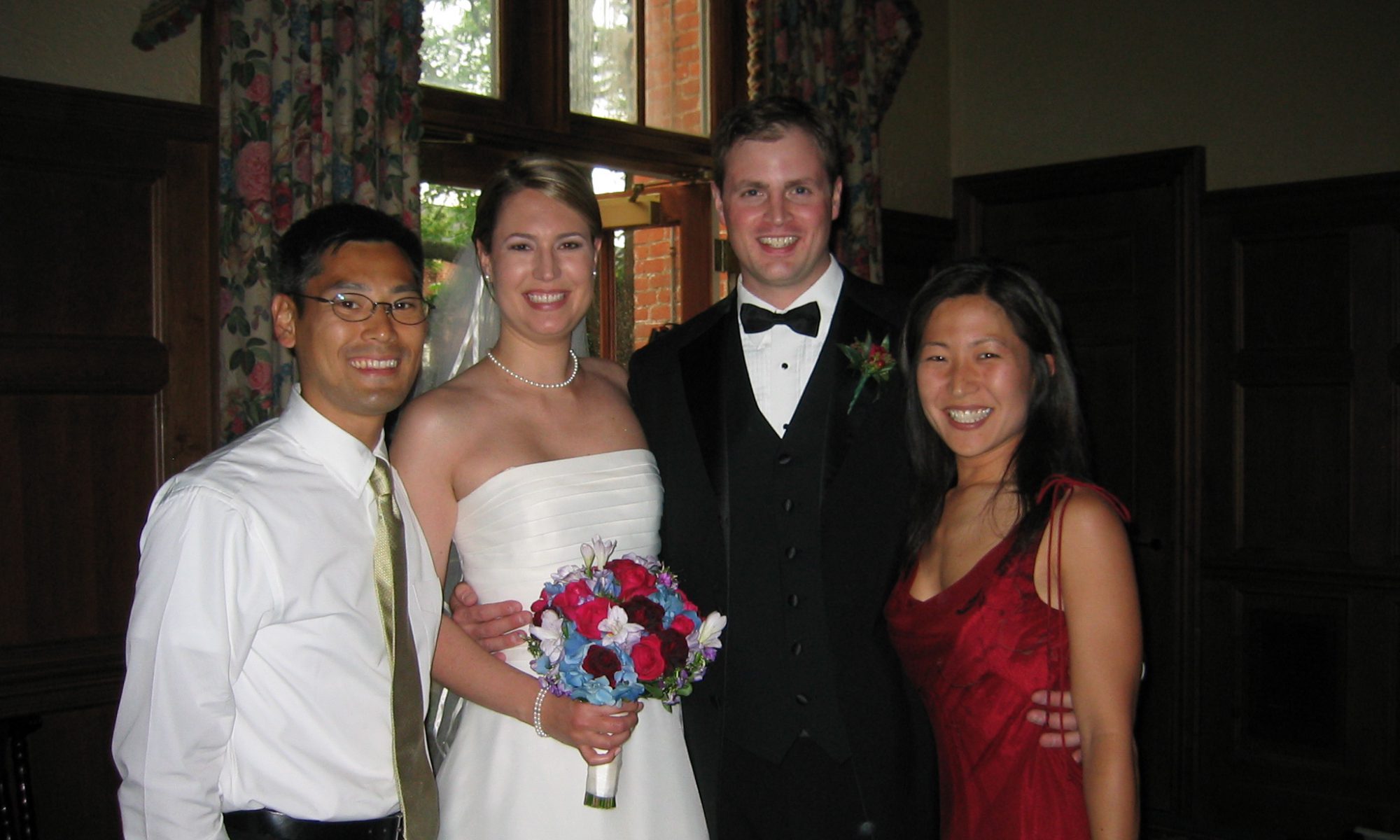