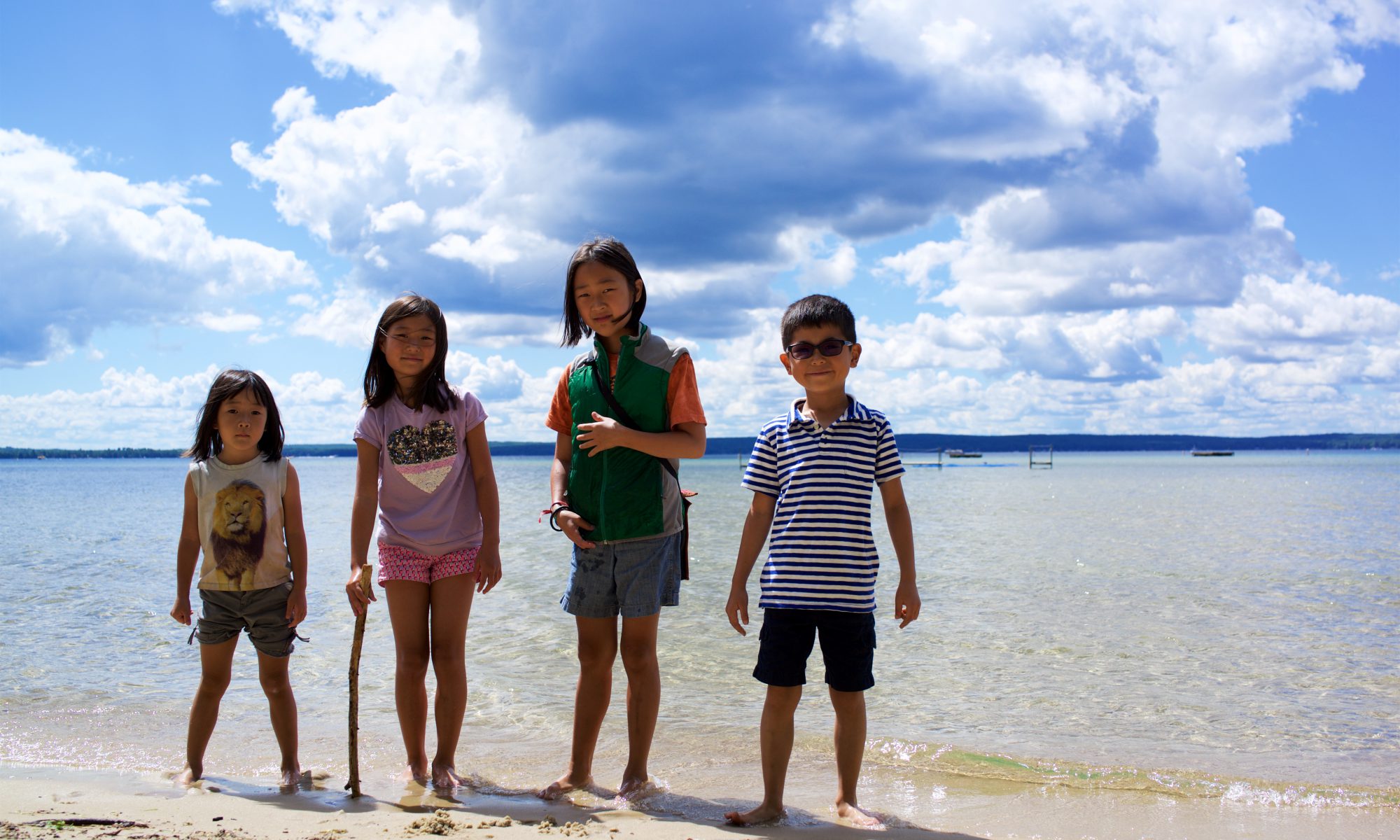 Sae Jong Camp started in 1976, so this year, a reunion was planned to celebrate its 40 years. It was conveniently held just before camp and although the official agenda was just an overnight, we upgraded to come up early and get as much time as possible together. This was my opportunity to finally get Olivia and Lucas to attend camp, and it allowed me to be with them for a couple nights to ease into it.

Jen met us at the airport on Thursday and we drove up together on Friday. The hard core group was small, and included only Doug, Sandy, Jen and us. I was worried the kids might get spoiled staying in the new Worthington Lodge, which was a little too nice compared to their regular camp accommodations. Jen and I bunked together right next to Olivia and Lucas.

On Saturday, more old-timers arrived. Grace, Sandy, Mary Ann and Doug and their families represented the 2nd generation of campers, as their four mothers were the founders of camp and to whom we owe so much. Jin and Christine made a special effort to come and join us from DC and our BFF Linda’s family came in from NYC. After some touring of camp and some fun on one of the high initiatives, we joined this year’s camp staff for dinner.

The staff members’ dedication and motivations for their service to SJC were very inspiring and especially gratifying to me as I retired 13 years ago. No one has dedicated more time, energy and years to SJC than Doug, who has been there for some 30+ years of the camps 40-year history. His mother, who I remember so well, would be so proud of him. I feel especially fortunate that camp has survived long enough for my own kids to finally participate.

We saw even more old friends on Sunday, as the campers arrived. Some really surprised me. Linda’s kids, Phoebe (the youngest in camp) bunked with Olivia, and Olivier bunked with Lucas. Also, Karin’s daughter, Jamie, was Olivia’s counselor. Karin get’s the assist for introducing me and Grace back in college.

Lucas had been especially apprehensive about going to camp. He was the youngest boy and on Sunday morning, I got up at 5:30am (2:30am “my time”) and couldn’t sleep as I was a little worried about him. There were some tears as I re-packed his bag. He pulled me aside for a private chat and said, “Dad, I need to tell you something. I only came here because I thought it would make you happy.” I died. He killed me at 7 1/2. “Buddy, that’s so sweet, but I only wanted you to come to make you happy.” He clung to me until the very end and there were tears.

Ben, the program director, and several of the counselors were my campers back in the day. It was awesome to have that continuity and know they were looking out for Olivia and Lucas. I had some special operatives who provided me with proof of life by dinner time and regular updates thereafter. They were fine. Our family’s 2nd generation of SJC campers were having a great time.