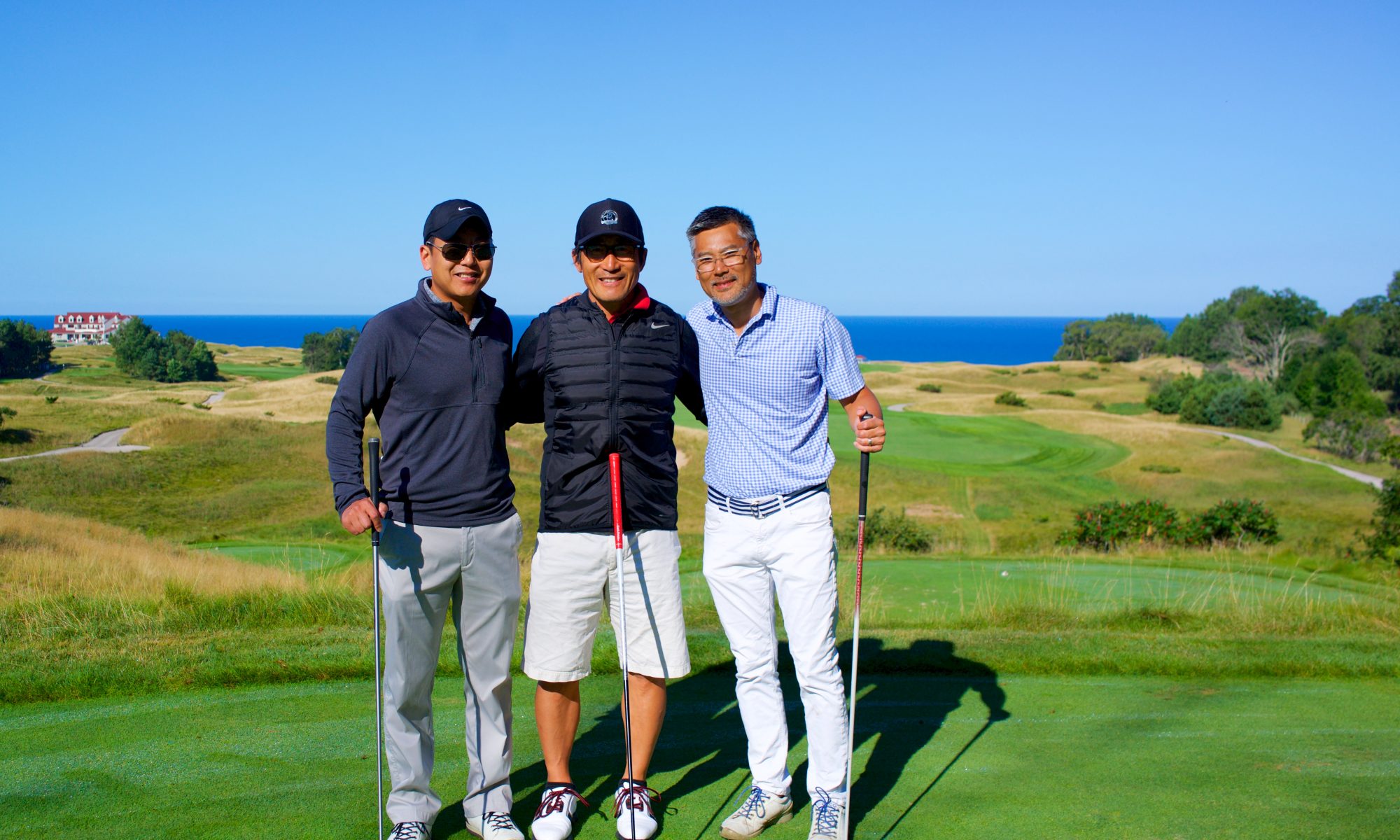 After dropping Lucas and Olivia off at camp, I had absolutely no where to be. Joseph (JP) and I have been contemplating this situation for some time. Still, we had no real plans.

We’ve been wanting to play Arcadia Bluffs for a while, but the opportunity didn’t arise until just a day or so before camp when a cancellation opened a spot on Monday. We left JP’s car at camp and headed to Crystal Mountain, which was not far from Arcadia Bluffs. When we arrived, we headed straight to the pro shop and got in a full round on the Mountain Course well before dark.

Eddie was visiting his parents in Ludington, which is about an hour away. On Monday, he and Ethan rounded out our foursome at Arcadia Bluffs. Despite living most of my life in Michigan, I had only laid eyes on Lake Michigan from the Michigan side a few times. I wasn’t quite prepared for how beautiful everything was: the lake, the elevation, and the links course nestled in the golden heather. Even though it was a tough course, JP went low and was actually under par through 9. Wow. I got our money’s worth on a per stroke basis. We all had lunch together and then JP and I decided to replay. We got in a solid 15 holes before we called it due to darkness. The wind had kicked up towards the end of the first round, but by late afternoon it was calm and beautiful as could be.

We had also secured a tee time for Tuesday. However, the one thing that didn’t go our way was that we wanted a room at AB, but it was booked (we only asked about 20 times during the day about cancellations). Graciously, Dr. and Mrs. Lee invited us over to their house, so we headed to Ludington. We got there late and stayed up even later being entertained by JP. On Wednesday morning, JP had to switch sports to tennis along with the entire Lee family. I went in search of coffee and postcards for the kids. We played golf at the Lees’ club, Lincoln Hills, followed by dinner together. We couldn’t have been more thankful for all their hospitality while we were golfing vagabonds.

Jen happened to be in Traverse City visiting friends, so we headed there to see them out at the bar. JP hit a wall like I’ve never seen (he’s usually always high octane), so we found a place to stay in downtown TC. Somehow he mustered some energy for 11pm ice cream. The next day we decided to play “The Bear” at the Grand Traverse, which was also a first for me. It was difficult, but fun. We had already payed for a reply when JP got the bat signal from our friend Anita that she was in town but had to head back to NY early. We changed gears and drove 3.5 hours back towards my parents house to meet up at Christine’s house.

JP now had the opportunity to entertain my parents for a couple days. We played U of M on Thursday (exactly a year to the day from our last round there). We had dinner at home together with Jen and cancelled our Friday golf plans at Forest Dunes. Our luck continued when a room finally opened up at Forest Dunes, which is the resort at which we stayed last year with Grace and YY. We got rained out then, so we were determined to play there this year. JP fancies himself a very lucky guy and true to form, when we checked in, they put us in a two-bedroom cottage because there was a group of 24 dudes that were expected to be a little rowdy. Perfect!

We finally got our last round together in at Forest Dunes, which didn’t disappoint. There was a lot of trouble and the greens were fast. The good news was that I made it through the whole week with only the balls I brought (and found of course).

I haven’t played this much golf since my honeymoon (Grace is the best). I just can’t see why this doesn’t become the annual ritual while the kids are in camp. We’re currently accepting applications for our 3rd and 4th players.