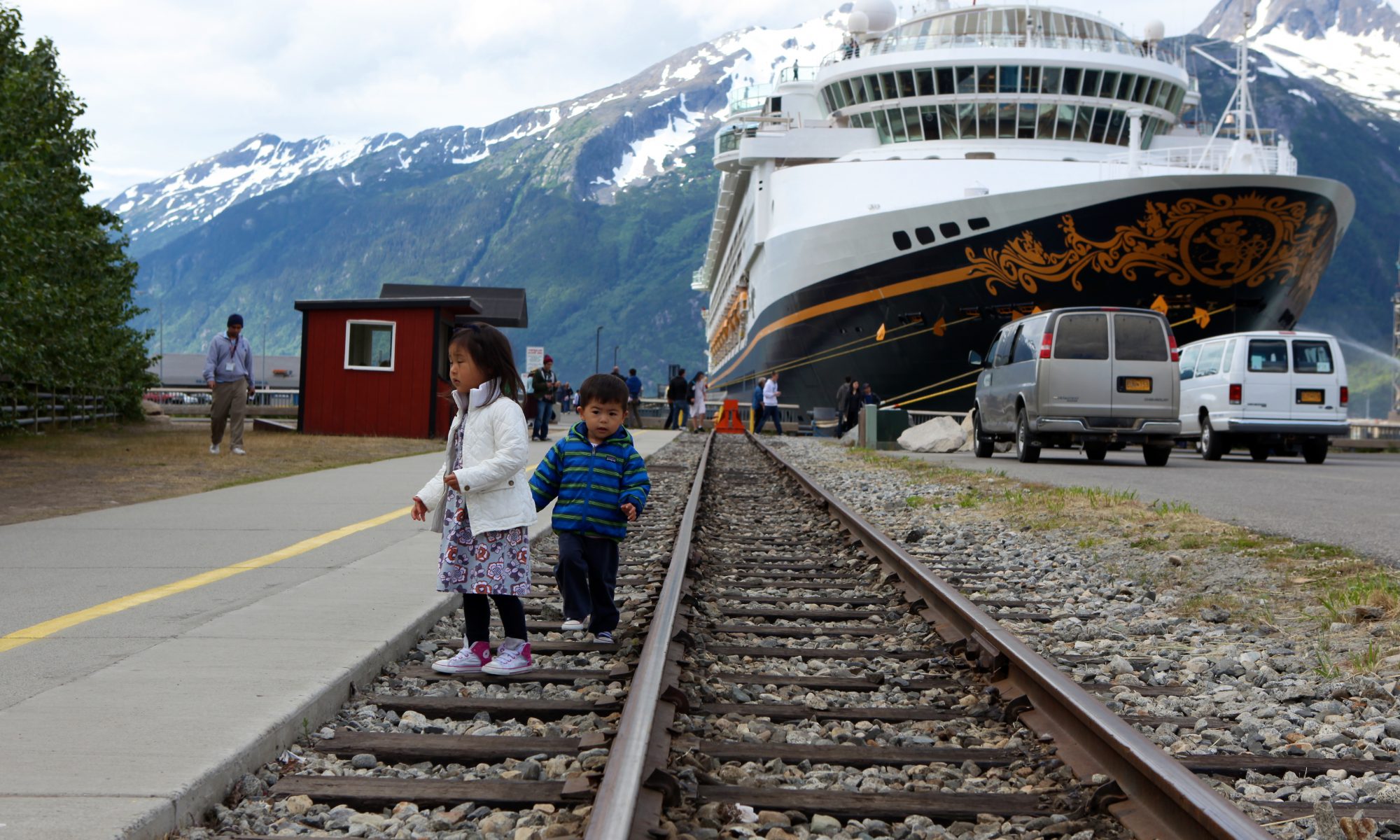 Grace’s mom turned 70 this year and her wish was for a family vacation. It was decided that we would all go on a cruise to Alaska. Disney started sailing to Alaska this year, so it made our decision easier given all the kids going.

The group included all of the Park kids and families as well as Charles’ parents, and his brother Arnie’s family and in-laws. We flew to Vancouver on Monday, June 27th. In normal fashion, Lucas and Olivia’s passports were issued on June 24th. We spent the afternoon exploring the harbor-side. We planned on meeting the Park clan for dinner (at a Korean restaurant, of course). We ended up walking, which turned out to be a bit of a hike.

We didn’t plan to board the ship until the afternoon on Tuesday, so we spent the day exploring Vancouver (i.e., walking to various malls and food courts). Once on the ship, we got settled in and readied ourselves for our daily rituals of eating and eating.

I’ll be perfectly honest and say that I have no idea where or how far we went on this trip. There was a day at sea. The first stop was up a channel to Tracy Arm, where we saw a huge glacier and where I saw my only whale on the trip. It was rainy and windy on deck.

The next stop was Skagway, which is a town of about 800 people. We didn’t opt in for the excursions because the kids are a little young. We took a horse and buggy ride around the town (which didn’t take long). We managed to get to the post office (after their lunch break) and also went to the public library.

Our second port was Juneau, the capital. We managed to find the one Korean-owned Chinese/Japanese restaurant for lunch. We took a bus to see the Mendenhall glacier. Apparently there are some bears in the area, which Olivia really wanted to see. I wasn’t seeking such a close encounter.

Our final port was in Ketchikan, which seemed the largest city. It was raining, so we just ventured into town for a lunch of local seafood and found a bakery for dessert. Then it was back on the boat for another day and a half cruise back to Vancouver.

On the boat were various activities for the kids including movies and live shows. Lucas was too young to be in the Club or the Lab, so he spent a few afternoons in the nursery (and was never happy about it – boo). Grace got in a couple spa sessions.

My recreation was at night with the guys after everyone went to bed. Given the demographic, there wasn’t really much going on at night, but we made our own fun. Some nights we went to the bar. Charles threw down some U2 and Red Hot Chili Peppers at karaoke and Dave rocked the house with Vanilla Ice. It was probably a good thing there wasn’t a casino on this ship. Instead, we spent time in the arcade. I quickly got over being the oldest only person in there. I faced my old nemesis, Galaga, and achieved my personal high score.

We enjoyed a couple nights in the adult-only restaurant and arranged a private room one evening for everyone in our party. We celebrated Charles’ and Grace’s moms’ birthdays a couple times during the trip.

The kids hadn’t been too exposed to Disney (by design), but their influence is hard to avoid. Lucas has been obsessed with his Buzz Lightyear pajamas and Olivia is only mildly afflicted with princessitis. She enjoyed meeting all the princesses, especially Belle and Ariel. The cutest moment on the ship for me was when we had just come from peeking in on Lucas in the nursery and when we exited, Minnie mouse popped out of an unmarked door in the hallway. Olivia and Minnie were face to face and Olivia spontaneously outstretched her arms for a hug, which she warmly received. It was awesome.

At the beginning of the trip, I anticipated a long week and by the end of the trip, it had flown by. It was a great family vacation.

Several people have asked about the Disney cruise, so these are my observations/recommendations: