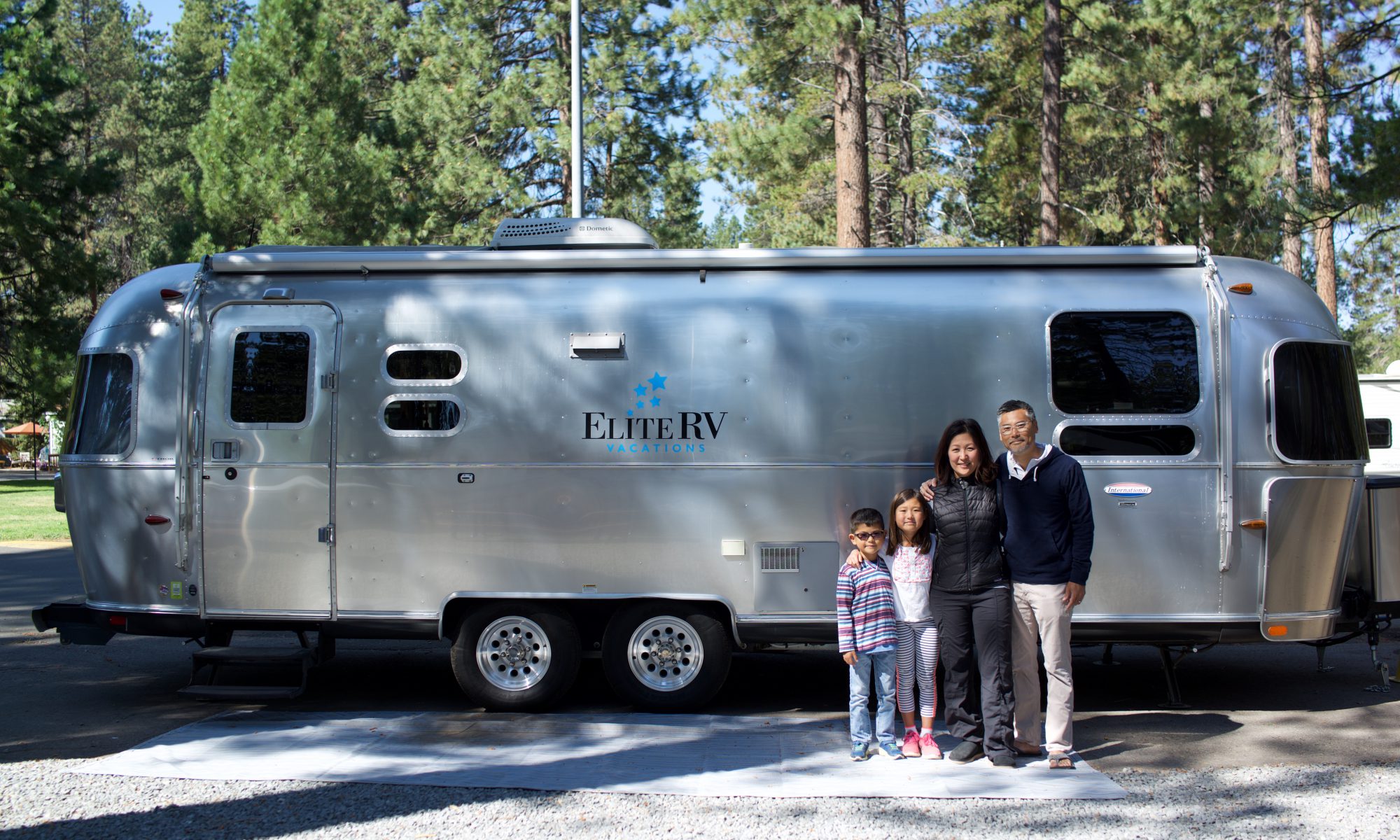 We all had such a great time on our Airstream trip last summer and it generated a lot of interest among friends. Jeremy showed the most initiative and several months ago, we had two Airstreams booked for the end of August. It wasn’t clear how committed the ladies were to a week on the RV, so I planned an itinerary that gave them an out after a few days. Grace also preemptively booked a hotel room in Tahoe.

As it happens, life gets in the way of the best laid plans and the Rogers family had to back out (reschedule?) at the last minute, which was totally understandable. I was still happy with my itinerary and Grace initially set the expectation that she would join for the first half. Right up until the last minute, I had planned to drop Grace off at the ferry so she could find her way home, but in the end she said she would join us for the whole week and she even cancelled her hotel room.

We rented again from Elite RV, which is under new ownership. Elaine actually reached out to me earlier this year after finding my last blog post and let me know they had taken over. Her husband, Brian, was also super helpful in coordinating the logistics. Because it was Jeremy’s first time pulling an RV, they were going to take one of the smaller ones and only the 19′ was available as the 20′ we used last year was booked. I opted for the one 25′ that was available, with only slight concerns that it was at the towing capacity of our truck. Along the way, Brian reached out and said he had a tight turn on the 25′ and asked if I wouldn’t mind taking the 27′ instead. I was only expecting it to be the 3.5 of us, so we really didn’t need such a big rig, but I figured it would be a good chance to test the extreme.

We picked up the Airstream at noon on Saturday and pretty quickly got underway, as I had been through the drill before. I immediately sensed the extra 2,000 lbs we were hauling and proceeded gingerly on our way up to … Marin. My theory was that the kids would have fun if we parked this thing in our driveway, so I figured they wouldn’t mind a semi-staycation for part of the trip. Ann and Jeremy used to live in Greenbrae, so I thought it would be a good chance for their kids to experience their parents old hometown. Even after they backed out, I figured it would be a great chance for the kids (and us) to do San Francisco stuff, which we rarely do.

Thus, we descended upon Marin RV Park. While it was a lot nicer than where we stayed in Half Moon Bay last year, it’s really about a 9 iron from the 101 on one side and a short swim to San Quentin State Prison on the other. The real benefit was being walking distance to the Larkspur ferry, which was part of my agenda. The kids always have fun with the Moon boys, who joined us for a bit last year. I asked them to come along on this trip, but they had already started school. We were in their backyard, so we met them for dinner at Farmshop at the Marin Country Mart on Saturday. The kids romped around on those big trees for hours.

We were back at it (Marin Country Mart) on Sunday morning for breakfast at Rustic Bakery before we headed out for a hike. It was one of the 5 things I had on my list of things to do that day. We drove up to the trail head on Mt. Tam and did the Steep Ravine Trail. Lucas was objecting to such a long hike and put a hard limit at 3.5 miles. Thankfully we were under it at 2.6 miles and the entire hike was downhill to the ocean. The kids had fun along the way and the hike went by fast for everyone. We took the bus back up to our cars and then headed back to the RV for the afternoon until dinner at … wait for it … Sushi Ko at Marin Country Mart.

Monday morning, we cooked our first meal on the RV before heading to the Larkspur Ferry, which we were going to ride into the city. Of course we  went to MCM for a quick stop while waiting for the next boat. The ferry ride was a lot of fun and the weather was typical for SF summer (cool and windy). We had lunch at Slanted Door (not exactly roughing it so far on this trip). Afterwards, we spent the afternoon at the Exploratorium, which was the first time we had all been to the new location on the Embarcadero. Hours of fun. Next on the agenda was a cable car ride. Grace has been in the Bay Area for 20 years and had never ridden it and neither had the kids. We indulged in a pedi-cab ride down to Fisherman’s Wharf, right past my old Bluelight.com office. We waited about an hour and the kids were super patient, though when asked if it was worth it, the answer was “maybe not.” We took it to the end of the line at Powell, picked up our favorites at the SF Center food court, Ubered back to the Ferry Building, and caught the 2nd to last ferry back to Larkspur.

Tuesday morning we had breakfast again on the RV before packing up and heading up to Tahoe. We stopped for lunch at our usual Il Fornaio in Roseville, which was convenient because I needed a big lot in which to park the Airstream. We only took up 6 spaces. It ended up being a long stop at the mall for some last minute supplies (and Merry-Go-Round and Pinkberry). Finally we were back on the road and arrived at Coachland RV park again in Truckee just after 5pm. Dinner that night was ramen in the RV.

On Wednesday, we drove over to South Lake Tahoe in the morning to spend the afternoon on a fishing charter. This was a first for our family and after not getting a nibble last year on Donner, I wanted to increase our chances of catching something. There was one other family on the boat and everyone, including Captain Sammy and his deckhand, Greg, couldn’t have been nicer. They set the expectations that the salmon for which we were fishing were difficult to land (about 50%) and sure enough, Olivia and Lucas hauled in 3 and lost 3 just as they were surfacing. The other family brought in a much larger trout, which was awesome for them. It was a beautiful and fun afternoon on the lake for everyone.

We gave our fish to the other family and opted for a well-earned dinner at Manzanita at Northstar. It was quiet as we expected and we enjoyed a nice meal at one of our favorite places in Tahoe. The kids slept well that night.

Thursday was our last full day in Tahoe. Lucas, Olivia and Grace did the ropes course in Tahoe City for a couple hours. Afterwards, we stopped in Incline Village for lunch on the way to Sand Harbor, which is another one of the kids’ favorite stomping grounds. Having lunch lakeside at the Lone Eagle Grill was awesome. My younger self only went to the Hyatt to gamble, usually while all my buddies were sleeping. Sand Harbor was gorgeous as usual and the kids spent hours there playing and exploring. We drove back to Coachland to clean up before dinner at Plumpjack at Squaw Valley. Creatures of habit we are.

On Friday morning, we started to pack up, went to downtown Truckee for a quick breakfast, and prepped the Airstream to be returned. The plan was to make it back non-stop, but Grace called an audible and we pulled into a Walmart for a quick bio-break. Just after 4pm, we pulled back into Elite RV.

I’m so glad Grace decided to come with us for the week. We all had a great time and the kids were sad to leave the Airstream behind. We have this trip pretty dialed in now and I’d go any year and every year for as long as the kids would like to. Next summer I think we might have to venture a little further, but even if we don’t, it’s going to be awesome. Let me know if you want to caravan.