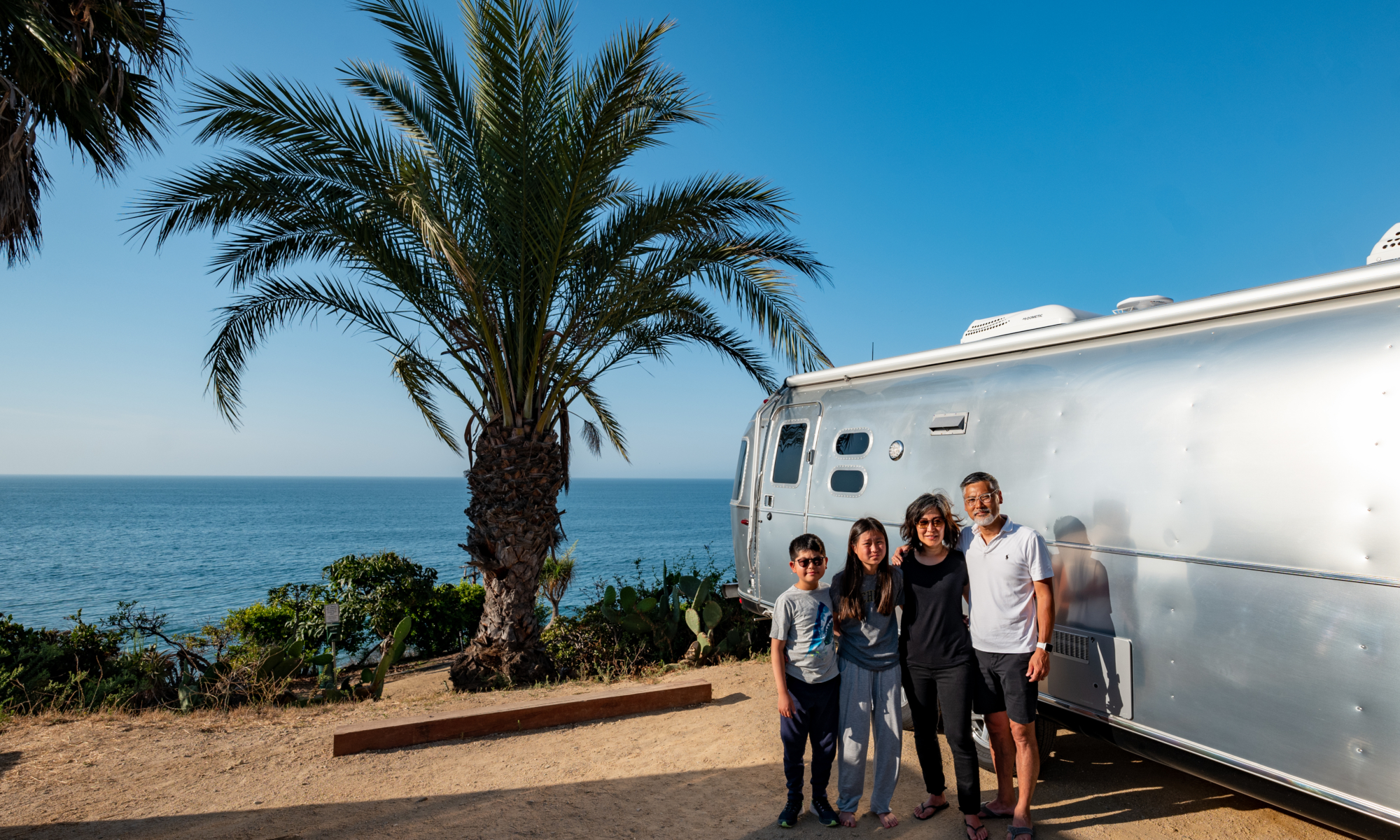 The last and final leg of our Airstream journey was to spend a few days in Malibu, where we ended our last RV trip. It was too long of a haul from Moab to Malibu, so we stopped for the night in Zion and stayed at the same Zion River Resort as last time. I went into town myself to get some supplies. The last time we were there the market was packed with people, but this year it was eerily quiet. This wasn’t like other places we had visited.

I was hoping to maybe catch the sunset, but my camera got unloaded and there wasn’t much light in the valley anyway. When I got back we had dinner and ended up playing late night Settlers of Catan. I came so close to winning (perhaps for the first time?). I ended up rolling a 7 on my turn while holding 16 cards. Then came a crushing defeat by Olivia.

We had about 8 or 9 hours of driving planned to get to Malibu. We considered stopping in Las Vegas like last time, but decided to just skip it. We stopped in St. George, Utah, for breakfast and shortly after getting back on the road heard a noise coming from either the car or the trailer. I thought it might be a flat on the Airstream.

We pulled over the side of the highway (scary) and I couldn’t see any flat or other problem. We kept going a little further and I stopped again (in a scarier spot) and again I couldn’t see anything. We descended down the mountain and I got off again at the first exit and got under the car and finally found the problem. One of the rear tires had separated and the rubber must have been rubbing on the inner fender liner because it was torn. I could see the steel belts. Honestly, this could have been catastrophic, so we were lucky to avoid a blow out at speed.

We were about 15 miles past St. George so rather than continue on to hundreds of miles of nothing, we turned around and made it safely to a tire shop where I had the full-size spare changed. It’s kind of an odd tire size and new tires were at least a day out. Grace suggested the dealership, so I called ahead to one in Las Vegas and they had them so we headed straight there. I couldn’t convince anyone to Uber with me to the strip to have lunch, so we grabbed In and Out and waited at the dealership. We were on our way after a couple hours.

The worst part about this was that we had to cancel our dinner reservation at Mastro’s in Malibu. We finally made it to Malibu Beach RV park after about 13 hours of travel. If there was a sport for towing an Airstream to get from the I-5 to the I-10 via the I-605 through DTLA at night, I would be champion. If it were required that your spouse must be your co-pilot during the race, I quit the sport.

Everyone was pretty wiped so we didn’t stay up late. It all seemed worth it when we woke up to the view of the ocean, literally out our back door. The rear hatch now seems like a must have option on the Airstream. Right, Grace?

We considered skipping LA due to it being a COVID-19 hot spot, but Grace really wanted to see her parents. This move itself was controversial, but we hadn’t seen them since Thanksgiving and they ensured a socially distant lunch outside. They’re doing their best to stay safe and it was really nice to see them and have them see the kids.

There wasn’t much downtime at all on this trip, particularly for the driver, but I had a 30 minute power nap with the ocean breeze flowing over me and it was blissful. We managed to squeeze in an early dinner at Mastro’s after all and it was a well-deserved meal while off the road.

After a trip to the hardware store to fix a leaky water hose, Olivia wanted to hit the beach, so we pulled over at Will Rogers Beach just as the sun was setting. She was so happy. The evening ended with Scrabble, where Grace crushed us with Bingo on her first turn.

The next day was our true beach day, so we braved the traffic and the other beachgoers at Zuma Beach. We spent a couple hours there and dug a hole of which we were all proud. We grabbed lunch to go at The Sunset restaurant right there and headed back to the RV to eat.

We had a quick turn to get ready to go to Ann and Jeremy’s for dinner in Santa Monica. This was a do over for Jeremy’s big birthday, which we weren’t able to make in Deer Valley last month. It was great for the kids to play and the adults to catch up. We’re glad to see them doing so well and also to meet their new dog, Layla (RIP Murphy).

On Sunday, we got our earliest start in order to get back to San Jose and were pulling out of Malibu by 8:15am. Malibu Country Mart is our unofficial home base so we planned to go there to grab breakfast, thinking it would be empty at that hour. I pulled in and the parking lot was full of classic and exotic cars and people (Wheels and Waves, apparently). Suddenly, we were the main attraction, pulling an Airstream through the parking lot. I’m sure it was equal parts WTF and don’t run over my McLaren. It was funny once we navigated our way back out of the parking lot.

The whole trip went by so fast, especially our short stay at the beach. We made it home without incident, if you don’t count the scorching heatwave and wild fires waiting for us in Burlingame. This was our longest and certainly most ambitious family trip ever, but it was really necessary after months of being at home. We visited so many amazing national parks and sights that I’ve waited a lifetime to see. Through 3,800 miles, I really don’t recall anyone complaining about the drive, so hopefully that part was painless.

That said, this was a real family road trip. There was fighting in the car … even between brother and sister. There was virtually no signal in Yellowstone, so it was like traveling in 2005. I had to coerce a few photos so I could get in some of them (is anyone really doing holiday cards this year?). But, it was all totally worth it.

This was supposed to be a test run on an Airstream lifestyle. Sure, everyone was happy to be home (i.e., see Luna). As long as we’re WFH and the kids are in virtual school, I’m ready to go nomadic. The Airstream has solar and dual-zone A/C, neither of which we have at home.